METAL ALLEGIANCE, the all-star metal band consisting of a rotating cast of musicians, including members of MEGADETH, TESTAMENT, has announce four intimate West Coast shows to start off 2016.

With the recent release of their critically acclaimed self-titled album, the musicians of METAL ALLEGIANCE are bringing their legendary live experience back to where it began! The West Coast run starts in San Diego on January 7, hits Las Vegas, Los Angeles, and wraps up in San Francisco on January 10. Don’t miss your chance to watch David Ellefson (MEGADETH), Mark Osegueda (DEATH ANGEL), Phil Demmel (MACHINE HEAD), Mike Portnoy (DREAM THEATER, THE WINERY DOGS), Troy Sanders (MASTODON), Alex Skolnick (TESTAMENT) and Mark Menghi do what they do best — play some heavy metal music!

As they prep for their momentous trek to Soundwave festival in Australia, they are bringing along american power metal kings CAGE as direct support as well as Arizona-based all-female rock quartet DOLL SKIN to get the night started.

“The entire ALLEGIANCE concept started on the West Coast back in 2011 and I’m stoked to bring it back there,” comments Mark Menghi. “The last time we played out there, no one knew we were secretly writing and recording an album. Well, a year later, we’re back! Can’t wait to see all of our West Coast friends.”

Mike Portnoy adds: “We are so excited to bring the mighty METAL ALLEGIANCE experience to Australia for Soundwave… but we are also stoked to announce that we’ll be doing five exclusive warm-up shows in the U.S. before heading down! First we’ll be ushering in 2016 with a special New Year’s Eve show on Long Island for our East Coast friends and then head over to California and Las Vegas for four very intimate club shows on the West Coast before heading Down Under for the mammoth Soundwave festivals.”

Says Skolnick: “Beyond excited to kick off 2016 playing METAL ALLEGIANCE originals and specially chosen covers — the first time with this unique lineup. Since unleashing the album a short while back, we’ve brought our live festivities to the East Coast, Mexico and Japan. West Coast: You’re next!”

States Ellefson: “This has been an incredible ride with some amazingly talented friends. Glad to see the ALLEGIANCE now thrashing back on the West Coast in the New Year.”

Advanced VIP packages which include a meet-and-greet, early entry, a VIP tour laminate, a limited edition poster and a shot glass are now available exclusively at Ticketspin.com.

All tickets as well as VIP upgrades will go on sale this Friday, December 11.

Brought together by METAL ALLEGIANCE principal partner Mark Menghi, the project’s original material came together from the creative minds of David Ellefson, Mike Portnoy, and Alex Skolnick, alongside Menghi. The four writers then reached out through their metal rolodexes to a diverse lineup of performers, each adding their own personal musical stamp to the collection of nine original songs.

In a recent interview with I Probably Hate Your Band, Menghi stated about the songwriting process for “Metal Allegiance”: “We wrote the majority of the lyrics for the record. In particular, Dave Ellefson and I co-wrote a lot of the lyrics to the record. We based it off our personal experiences in life, some of the fucking crap we went through. For example, with ‘Can’t Kill The Devil’, he had two lines for that song: ‘Can’t kill the Devil, the Devil never dies.’ And when he said that to me, I was, like, ‘Just stop right there,’ and an hour later, I came back with all the lyrics for the song. And I basically told a tale, I told a story about the Devil. We all have a Devil in our life. I told a story about my Devil and combined it with his.” 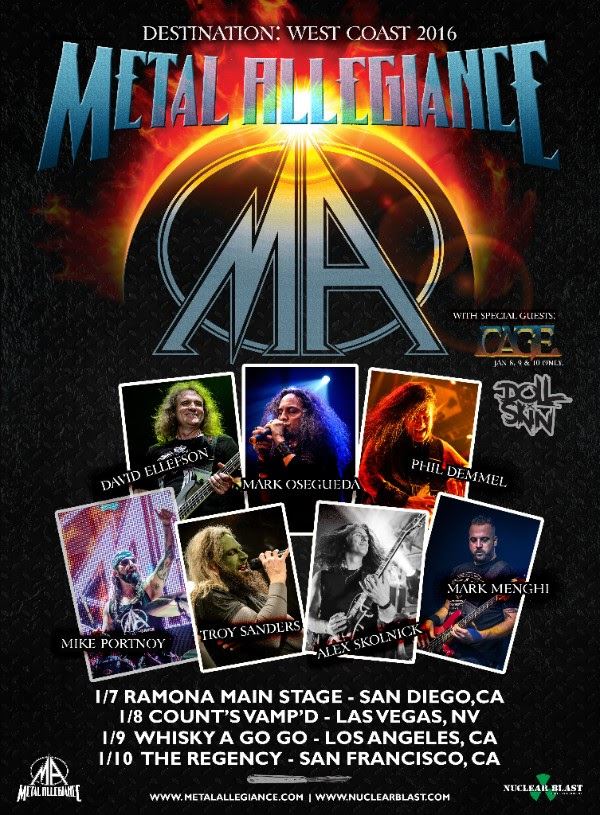