SEPULTURA members Max Cavalera (guitar, vocals) and Igor Cavalera (drums) will celebrate the twentieth anniversary of the band’s classic album, “Roots”, by performing the LP in its entirety on a North American tour in September/October. They will be joined by their CAVALERA CONSPIRACY bandmates Marc Rizzo (guitar) and Johny Chow (bass).

“Metalheads! It’s time,” says Max. “20 years ago, we released the ‘Roots’ album and changed the face of metal forever. Now, we’re returning to ‘the roots’ to show everybody the magic and inspiration of the ‘Roots’ live experience! You cannot miss this return to roots 2016!”

Igor adds: “I am very proud to play ‘Roots’ again, to reaffirm that after 20 years, it still moves people! We hit the stage again with ‘Roots’ to destroy everywhere we pass by!”

The tour will feature support from THE BLACK DAHLIA MURDER, COMBICHRIST, ALLEGAEON, ALL HAIL THE YETI and ONI. Fans who attend the shows will be able to purchase special meet-and-greet passes from the merchandise booth. Max and Igor will take photos with fans who grab meet-and-greet passes and sign copies of the “Roots” CD, cassette or vinyl. This applies only to the “Roots” album. Only one autograph and one photo will be permitted per person.

Tickets for most markets are on sale beginning today (Friday, July 29) at 10 a.m. ET.

Max and Igor played all of “Roots” at this year’s edition of the Amnesia Rockfest on Friday, June 24. Fan-filmed video footage can be seen below.

Max spoke to Holland’s FaceCulture about how he looks back on the “Roots” album twenty years later. He said: “Yeah, [the personal stuff around the band] was chaotic, but musically, it was good. I think ‘Roots’ is an excellent record. It’s a very brave record. It’s a very fearless record in terms of saying, ‘We’re gonna do this. No matter what people say, we’re gonna do it.’ And we did it. And it was a huge risk. Not many bands take that risk. And we stuck to our guns and put the album out. And I think it was a very interesting record, because I think it was the beginning of my experiences in world music, which I really love, and bringing metal… making metal different. You can combine indigenous sounds and stuff with metal and make something cool with it. So I think ‘Roots’ was the blueprint for all that; it was like the first one that was like that. We went to the Xavantes tribe and recorded with them. It was killer. It was an amazing experience.”

Asked in a December 2013 interview with DeadRhetoric.com if he was a proponent of the down-tuned guitar approach, like Max was, around the time when bands like KORN and the DEFTONES were just beginning to take off in terms of popularity, SEPULTURA guitarist Andreas Kisser said: “At the beginning, not much. I was skeptical of the low tuning because bands like KORN or the DEFTONES, they don’t have the fast pace of SEPULTURA‘s music. I was concerned to lose that kind of fast ability and the picking, the heavy picking on sloppy, low strings. But there are so many possibilities of using heavier-gauge strings, which give that kind of tension, and you don’t lose that ability to play fast. ‘Trauma Of War’, the song that opens the [new SEPULTURA] album [‘The Mediator Between Head And Hands Must Be The Heart’], it’s in low tuning, but it’s a very fast song, but we don’t lose that kind of ability. I learned how to do deal with that, and you open a lot of worlds in music, but yeah, at the beginning I was a little skeptical.”

Speaking to Live-Metal.net in 2009, Max admitted that he drew inspiration from some of the so-called early “nu metal” bands during the songwriting process for “Roots”. He explained: “SEPULTURA did [take] a little bit of an influence from KORN and DEFTONES in some areas. And the funny thing is that we influenced those bands from when they started out. I talked to the KORN guys and they said they listened to ‘Chaos A.D.’ religiously when they started — it was like one of their favorite records. So it’s kind of a 360 degrees kind of influence — back and forth.”

“Roots”, along with 1993’s “Chaos A.D.”, is considered SEPULTURA‘s most commercially successful release, having been certified gold in 2005 by the RIAA (Recording Industry Association of America) for U.S. shipments in excess of 500,000 copies.

In 1996, Max exited SEPULTURA after the rest of the band fired Max‘s wife Gloria as their manager.

Igor left SEPULTURA in June 2006 due to “artistic differences.” His departure from the band came five months after he announced that he was taking a break from SEPULTURA‘s touring activities to spend time with his second wife and their new son (who was born in January 2006). 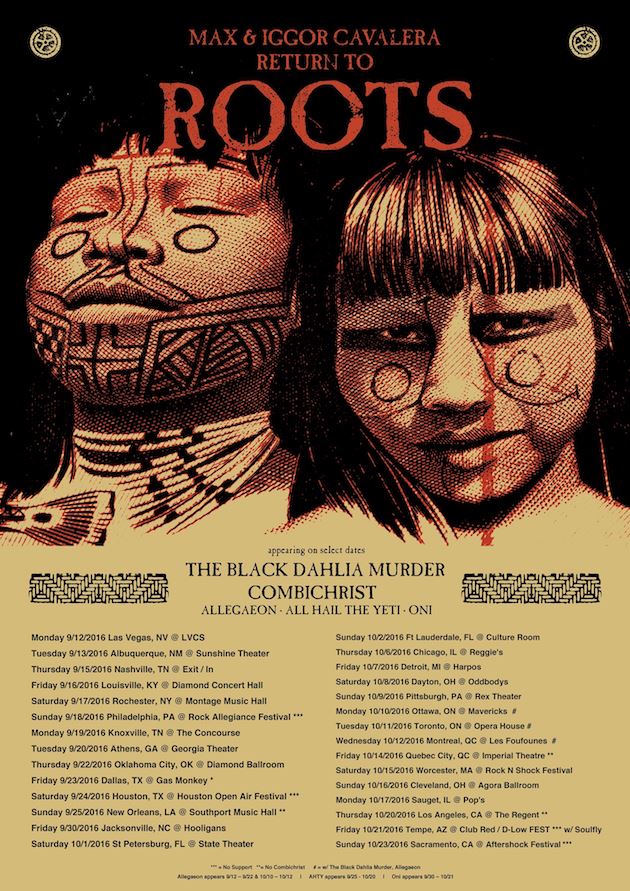