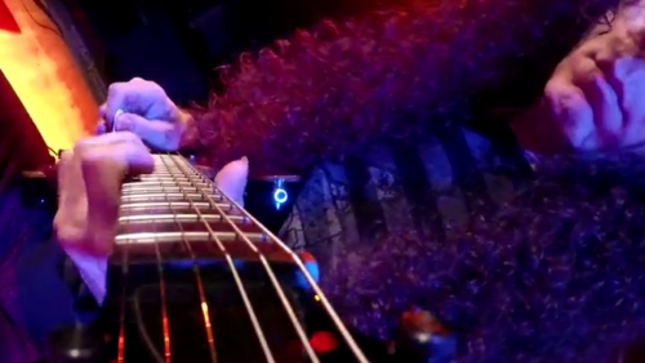 On January 27th, former Megadeth guitarist Marty Friedman held a guitar clinic at the Musicians Institute in Los Angeles, CA for students and alumni. During the clinic a GoPro camera was mounted on the neck of Friedman’s guitar, allowing for a live feed of his playing. Check out the footage below:

Friedman spoke with Lecture on the same night Land about his development as a guitar player. An excerpt from the interview is below followed by clips from the clinic shot by Lecture Land.

LL: When did you consciously start to develop your own unique voice, tone and playing style? It has really set you apart from the pack.

Marty: “It wasn’t that I was necessarily moving away from the pack, but like I said in the clinic today, when you reach a certain point of skill on the guitar, a lot of guys go into jazz fusion or classical or some kind of adult music, start getting good and they cut their hair. So I wasn’t into that and I found that analyzing foreign music and particularly the vocals of Japanese traditional music was very stimulating and that’s when I found that I was doing something different from everybody else.”

LL: On Rust In Peace (Megadeth), did you guys know that you were working on such a classic? Were you surprised by the response from fans?

Marty: “Well, we knew we liked it, but I was very surprised that such a cool album like that would do as well as it did. Because I thought it was really cool, it was a great album, really aggressive and heavy, it was killer! But I had no idea that people liked that kind of stuff, so i was like ‘Wow, I can’t believe people are buying this, this is something that I love, why does everybody else like it?'”