An EPK (Electronic Press Kit) for LYNCH MOB‘s new album, “Rebel”, is available below. The CD will be released in August via Frontiers.

The first song and video from the album will be premiered next week.

In a recent interview with Myglobalmind, LYNCH MOB guitarist George Lynch stated about the band’s musical approach: “I think LYNCH MOB tends to have that core sound which is the desert, loose-based, rock sound with a mystical component to it. I think that’s… we inherently know that. So we always use that as our foundation, almost unconsciously, and anything that flows from that, we can go off and play the different directions and try different things, but within the context of the foundational components that make the band what it is, what it’s known for. And that flows from the chemistry between Oni [Logan, vocals], myself and our history. So it’s not something that we even decide to do; it just sort of happens right back from when we formed a band together. We just have a style that, even if we’re in a room and I go, Okay, I’m going play this weird riff that has nothing to with anything that you’d think we’d’ be about’ [chuckles], it ends up becoming exactly what we’re about. [laughs] That’s what’s neat about it. It’s not like we’d have to really try to be who we are. We are who we are, and everything we play sort of conforms to that within the context of our mutual little musical struggle. We’re sitting in a room together, writing. There’s a chemistry there.”

Asked about Logan‘s latest return to LYNCH MOB in time for the recording sessions for the band’s 2014 EP, “Sun Red Sun”, Lynch told “The Classic Metal Show”: “I’ve loved Oni‘s voice and I’ve loved his lyrics and I love things about him, things that he does, but again, I’ve been frustrated my whole life with singers in general. And I just got to the point now where I just kind of let it go. I’m not trying to control the universe. I just do what I do. If people wanna work with me, they work with me. If not… I try to do the right thing. I treat everybody fairly. So Oni‘s back. Things are going well right now… Right now everything is wonderful. We’re in our honeymoon period. It’s kind of like Elizabeth Taylor and Richard Burton; we just keep getting married over and over again. We get divorced so we can get married again.” 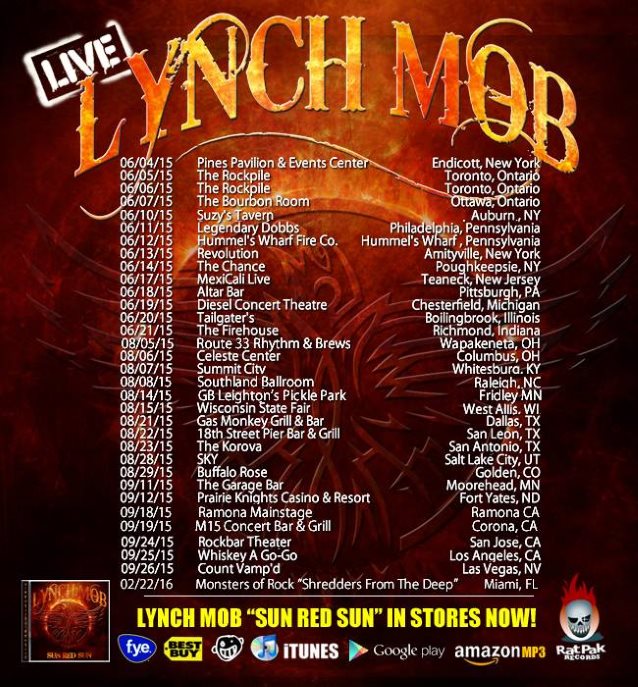