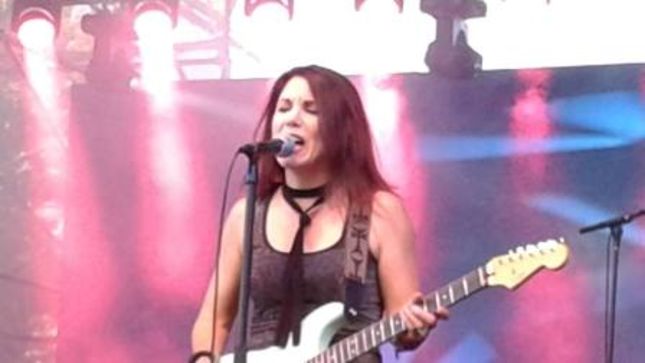 Canada’s original metal Lee Aaron, who is gearing up to release her new album Fire And Gasoline, has posted a tribute to music legend David Bowie, who died on January 10th at the age of 69 following an 18-month battle with cancer.

“David Bowie…I barely know where to start. In the mid 70’s my dad brought home a trunk full of records when the station at the college where he worked cleaned out their vinyl library. In that pile I discovered albums that went on to form the soundtrack of my youth. I remember putting on Aladdin Sane and having my mind blown by ‘Jean Genie’ and ‘Panic In Detroit’. Serious blues grooves, warped and twisted into some of the most electrifying songs I’d ever heard. Years later, when I left my label and went indie, I was honored to have Reeves Gabrels from Bowie’s Tin Machine play on my Emotional Rain album. He had glowing things to say about Bowie personally and as an artist. Thank you David Bowie for having rocked my world.”

Aaron posted an update on her new album late last year, as follows:

“I’ve been blessed beyond belief so far in that I’ve been able to work with some incredible talent on this recording. From the amazing musicianship of my band (Sean Kelly, Dave Reimer and John Cody – and yes folks, it is indeed a band: real musicians playing real parts in real time in a real studio!) to engineer extraordinaire Ben Kaplan (Mother Mother, Hedley) to the accidental, but brilliant, pairing with John Webster. I like a person who will entertain my craziest ideas (and not laugh) as well as contribute a few mad scientist moves themself.”