LAMB OF GOD frontman Randy Blythe spoke to Greg Prato of Long Island Pulse about the band’s summer tour as the support act for SLAYER. Asked if it’s as difficult opening for the California thrash legends as everyone says it is, Blythe said: “For us? No. And I’ll tell you why. Our first real tour that we ever did we were opening for GWAR. And GWAR fans… they can be as passionate and as ruthless as SLAYER fans. If you give them a chance, if they smell weakness, they will attack. And all you’ll hear is, ‘GWAR! GWAR! GWAR!’ It’s certainly the same situation with SLAYER — they will ‘SLAYER!’ chant you off the stage, if you don’t come correct. When we went out on this tour with GWAR… we knew it was like that, so we played at a breakneck speed, three to four songs in a row… Never even gave them a chance, no space in between songs, to start chanting. And that sort of hit-it-hard and hit-it-aggressive mentality has stayed with us.

“Touring Germany opening up for [SLAYER]… that was interesting. We didn’t get chanted off the stage, but at that time, the German SLAYER fans were very much there for SLAYER. It was kind of like crickets. They’re looking at you like [says in German accent], ‘Why are you not SLAYER? We are here to see SLAYER?’ [Our video guy] even made up this character called Baron Von Nobody Cares. He was this German guy who would sit there and look at you and go, ‘Ah! You are not SLAYER.’

“When you open up for a band like SLAYER, you have to come out and you have to be confident and hit it really hard. And that’s what we’ve done from the beginning, and it’s served us well. You can’t slack when you play with SLAYER, that’s for sure. Their fans…God knows what they’ll do to you. [Laughs]”

LAMB OF GOD‘s tour with SLAYER and BEHEMOTH kicked off on July 12 in Bemidji, Minnesota and will run through August 20 in Phoenix, Arizona.

Blythe recently told the “Sixx Sense” radio show that it will be “time to take a break for real” after the completion of LAMB OF GOD‘s current touring cycle and “concentrate more on writing and being at home with the family.”

LAMB OF GOD released a new EP called “The Duke” last November via Epic. The EP’s title track, which was recorded during the sessions for the band’s last album, “VII: Sturm Und Drang”, was inspired by the plight of a LAMB OF GOD fan named Wayne Ford, who was diagnosed with leukemia in 2010 and died five years later at the age of 33. 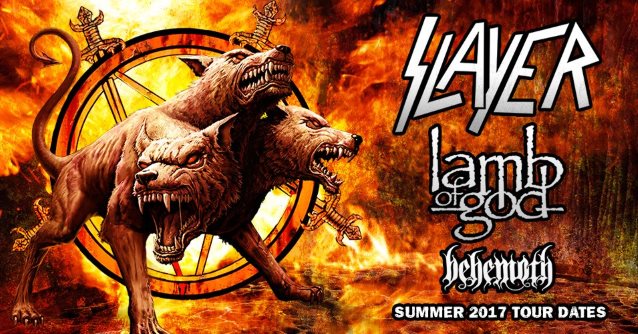