Matt of Emptyspiral.net recently conducted an interview with Cristina Scabbia and Andrea Ferro of Italian heavy rockers LACUNA COIL. You can now watch the chat below.

Asked how they would describe the new LACUNA COIL album, “Delirium”, to a fan, Ferro said: “The most obvious thing is that it’s a heavier record and probably darker as well. But, in general, I think it’s sort of a new start, a new chapter for the band, because when Marco [Coti Zelati, bass] was songwriting for the record, he really wanted to break the barriers of the cliché of a LACUNA COIL song. Because we’ve been doing a few albums now, so we didn’t wanna be imprisoned in our own way of writing songs. So he’s been looking also at younger songwriters, people that maybe [don’t] have our experience in songwriting, but definitely [have] a fresher attitude, because they learned in a completely different way; they grew up with different media that are available right now for the new generation that are influenced by the YouTube or social media instead of the way we grew up, just by listening to then records and then trying to sound like our favorite bands. So, this fresher approach has been helping us in kind of destroying our [conventional way of writing] a LACUNA COIL song. We’ve always done it that way, so why, this time, don’t we try doing it this other way? So when we had, for example, a heavy song, with heavy riffs and heavy drums parts, instead of trying to blend it into the LACUNA COIL sound, we’d just push it into a heavier direction and do what the song was calling for. So that was the difference in the songwriting process. And also the freedom of saying, ‘Okay, we wanna do a song with all-girl vocals,’ we’d do it without worrying if it’s not exactly what people are expecting from us. [We wanted to] surprise ourselves first and then also the people that [are] gonna listen to it. That’s why we also started the record with a song like ‘The House Of Shame’, which is pretty heavy and different.”

Added Scabbia: “I believe that [fans of LACUNA COIL] will get into the album, they will be sucked by the record, because with every song, everything will make sense; the whole record will make sense. I think that the biggest difference of ‘Delirium’ compared to the previous records is that on the previous records, there was always an overall idea, but the songs weren’t really tied to each other. There wasn’t a sense of continuity. In this one, it’s like you’re projected in a location, and you know exactly what’s happening. You really see things, because in the lyrics, you hear the description of the place, so you know exactly where you’re at. You see the record, so I think this is the biggest difference compared to the previous records. Now you have a complete package, ’cause everything makes sense; everything is tied together.”

“Delirium” will be released on May 27 through Century Media. The CD was recorded at BRX Studio in Milan between December 2015 and February 2016. The effort was produced by LACUNA COIL bassist and main songwriter Marco “Maki” Coti-Zelati, with engineering by Marco Barusso and additional assistance from Dario Valentini. Coti-Zelati also created the artwork for “Delirium”, which is based on an atmospheric session captured by Italian photographer Alessandro Olgiati.

LACUNA COIL has recruited Diego Cavallotti as a fill-in guitarist for the band following the recent departure of Marco “Maus” Biazzi.

Biazzi left LACUNA COIL in January, explaining in a statement: “I felt I couldn’t add more in this project any longer so I decided to leave my second family, LACUNA COIL, to take a different path for a new challenge in my life. 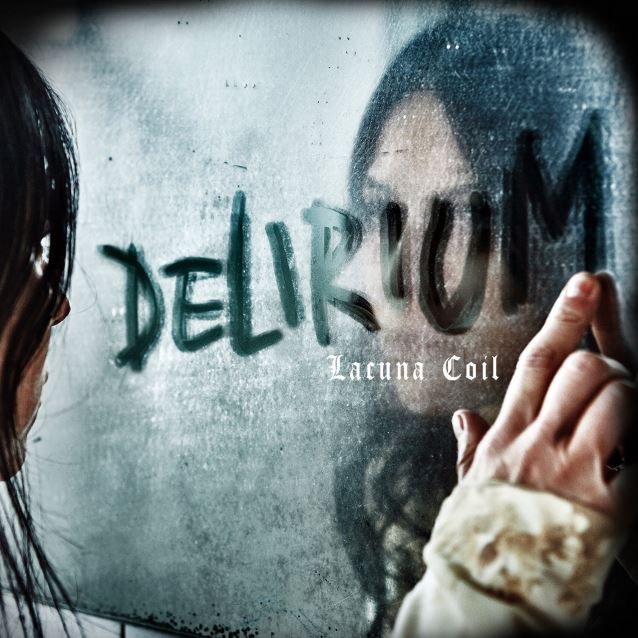