In early 2017, German thrash metal veterans KREATOR will tour Europe in support of their upcoming, yet untitled new record. Legendary guitarist/singer Mille Petrozza and his crew will be accompanied by a varied as well as iconic billing. Brazilian-American extreme metal pioneers SEPULTURA are announced to be direct support to the headliners, followed by visionary Swedish melodic death metallers SOILWORK and Belgium’s finest death/grind outfit ABORTED.

Commented Petrozza: “Finally we are gonna be back on a headlining tour through Europe again. It will be more than two years by then since our last run and we have some amazing ideas for a new stage show, supporting our new album. It will be nothing less than spectacular, I promise! Looking forward to see all of you metal maniacs in 2017. And this will just be the beginning…”

KREATOR is working on material for the follow-up to its 2012 album, “Phantom Antichrist”, for a tentative 2017 release.

“Phantom Antichrist” sold 3,900 copies in the United States in its first week of release. The CD landed at No. 1 on the Top New Artist Albums (Heatseekers) chart, which lists the best-selling albums by new and developing artists, defined as those who have never appeared in the Top 100 of The Billboard 200.

SEPULTURA recently entered Studio Gröndahl in Stockholm, Sweden and Fascination Street Studios in Örebro, Sweden to begin recording their new album for a tentative late 2016 release. Helming the sessions for the follow-up to 2013’s “The Mediator Between Head And Hands Must Be The Heart” is Swedish producer Jens Bogren, who has previously worked with OPETH, KREATOR, PARADISE LOST, SOILWORK and AMON AMARTH, among others. 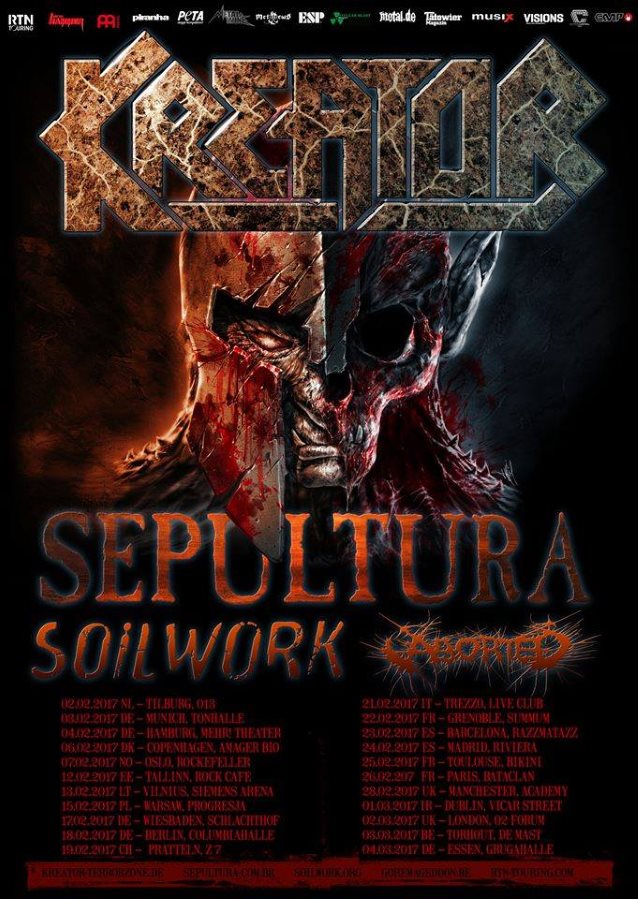