To celebrate more than twenty years of KORN, the band will perform its self-titled debut album in its entirety (and more) in intimate U.S. venues this October. Support on the trek will come from SUICIDE SILENCE and ISLANDER.

KORN performed its self-titled debut album from front to back for the first time in the U.S. on March 14 at the Brooklyn Bowl in Las Vegas. The performance commemorated last year’s 20th anniversary of the 1994 record’s release, and featured just the second-ever live airing of the song “Daddy”, which was last played in concert in 1995. The song was written about singer Jonathan Davis‘s experiences with being molested as a child.

“It was crazy, ’cause the song ‘Daddy’, we started playing that…. We hadn’t played that since, like, 1994-1995, just ’cause Jonathan’s really… it’s really emotional for him,” KORN guitarist Brian “Head” Welch told Metal Hammer (see video below). “But he said he still gets emotional doing it some nights, but he just… he says, ‘I’ll do it for the fans.’ And, I mean, every night there’s somebody crying in the front row, ’cause there’s a lot of people that have been abused. It’s really special to play that song. It’s a dark song — it feels dark and everything — but it’s kind of like therapy, I think, for people.”

Davis said last year in a Rolling Stone article on the 20th anniversary of the first album that he gave up a good job and took drugs and alcohol while recording the group’s iconic self-titled 1994 debut.

The singer explained: “I had to quit my job where I was making real money as a mortician, and had my own house, to having nothing — working at a pizza place and living under some stairs.” Davis added that he spent most of the recording sessions either drunk or high on meth.

Regarding the impact that KORN‘s debut album had on the hard rock and heavy metal scene, Welch said: “Just changing the face of metal back then, it’s crazy how it happened. And I still can’t wrap my head around it. To this day, I’m just, like, ‘What?!’ But we’re very thankful. Now that we’re older and wiser, we’re grateful for the chance to be able to do what we’ve done and the impact that we’ve made.”

Added KORN bassist Reginald “Fieldy” Arvizu: “People even come up today and tell us that our band influenced them, and if it wasn’t for us, they wouldn’t be doing what they’re doing. It’s kind of still… I don’t really believe it. Because a lot of these bands telling me this, some of ’em are as big as KORN, if not bigger. It would be different if KORN was such a big band and all these little bands [were telling us], ‘Oh, you’ve influenced us.’ But now there’s these bigger bands that say that we influenced them in a lot of ways. For example, we just got off tour with SLIPKNOT, and finding out these guys were influenced by us a lot. And they’re massive. So it’s kind of… I feel like, ‘Wow, this is weird.’ I don’t know how to say it. I feel like it’s not really real.” 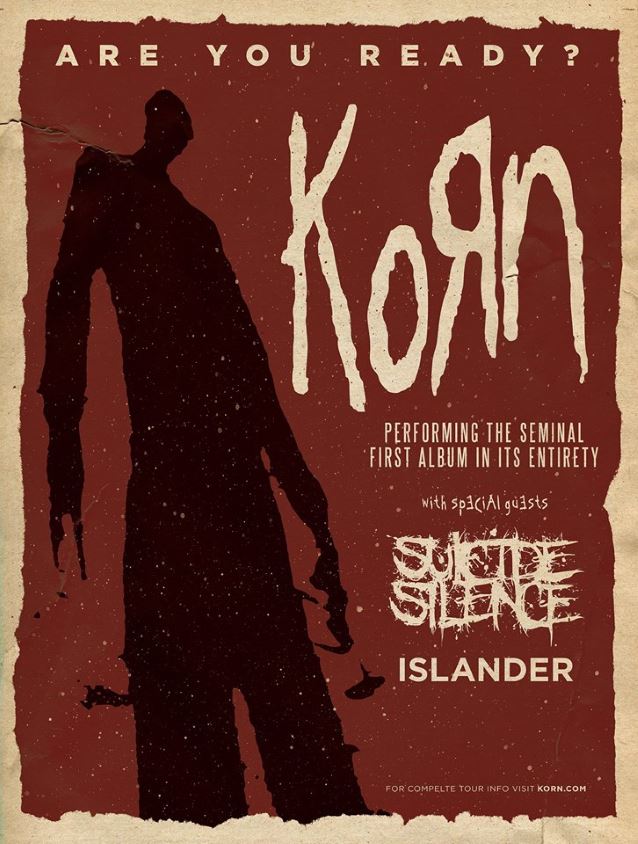