Canadian extreme metallers KATAKLYSM will release their twelfth studio album, “Of Ghosts And Gods”, on July 31 via Nuclear Blast. To coincide with the new CD’s arrival, the band will release two new KATAKLYSM hot sauces, “Ghost Fire” and “God’s Fury”.

Says KATAKLYSM frontman Maurizio Iacono: “What better way to celebrate a great new album with the release of KATAKLYSM‘s own hot sauce! We believe that a beer in your hand, metal music for your listening pleasure and a bottle of hot sauce in your pocket to spice up any meal go hand in hand in the metal world.”

“Ghost Fire” is made with ghost peppers to bring the extreme heat and “God’s Fury” is a milder, but hard-hitting sauce made with garlic and habanero peppers. These hot sauces will be made available in limited quantities with the new album pre-order on KATAKLYSM‘s official web site, www.kataklysm.ca, and will be available at concerts worldwide .

The cover artwork for “Of Ghosts And Gods” was created by up-and-coming dark and macabre artist Art By Surtsey. 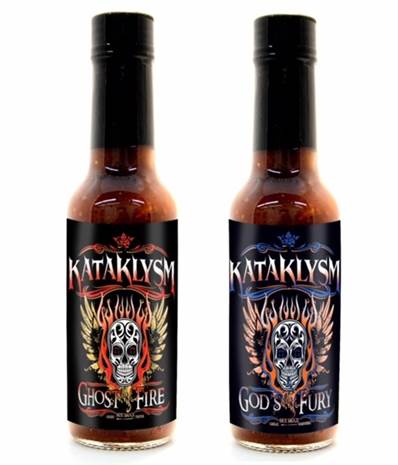