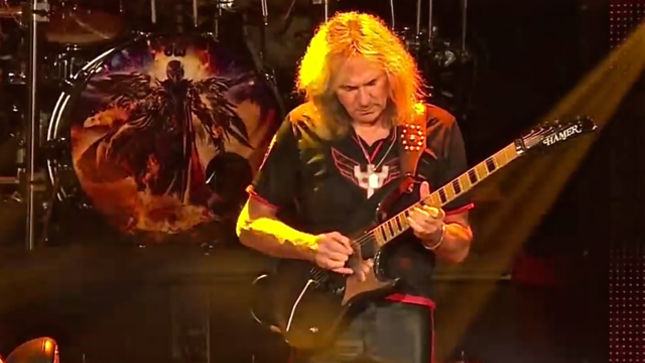 In a new interview with Gigwise.com, Judas Priest guitarist Glenn Tipton discusses how the band owe their success, largely, to their disregard for convention.

“I think we were lucky the way we wrote and the way we sound and the way we perform collectively has its own character,” explains Tipton. “It’s very often the quality that I quote is the most essential [in music] is recognise your style, character and talent and expand on that. That’s all we did. We sat around a gas fire with our slippers on and wrote songs and they became heavy metal classics in their own right.”

Read the complete interview at Gigwise.com.

In a recent interview with Reverb, Judas Priest guitarist Richie Faulkner is asked for an update on the follow-up to the band’s Redeemer Of Souls album.

Says Faulkner: “We’re looking at maybe next year going into the studio again and putting down some ideas and seeing what we’ll come up with. The first tour I did was the Epitaph tour, and you can see why these guys have been doing it for 40 years. They love what they do, and it’s inspiring.

“When you go around the world and play in front of all these passionate fans in different counties, it inspires you to go and create new songs, and when you create news songs, it inspires you to go back out on the road again and play those new songs live. Now that we’re on the road playing Redeemer Of Souls and these new songs live, it’s again inspiring us to go back into the studio and do some more. A lot of people say to these guys, “What’s the secret of doing this music for 40 years?” You can see why this happens: because it inspires us.”

On how the album might shape up, stylistically: “We don’t know what direction it’s going to take yet. Is it going to be a classic Priest record? Is it going to be a pioneering record, which Priest were famous for back in the day? They pushed the boundaries of heavy metal. That’s why they’re pioneers. We don’t know. We’ve got to follow up the quality and standard of Redeemer of Souls. It will be exciting to get back into the studio next year and see what happens.”

Read the complete interview at Reverb.com.

Video footage from Judas Priest’s November 12th show at the Air Canada Centre in Toronto (Canada) has been uploaded by RJK Studios. Watch the footage below.

Check out BraveWords’ photo gallery from the concert at this location.