According to Billboard‘s latest Boxscore data, the summer 2018 leg of IRON MAIDEN‘s “Legacy Of The Beast” tour grossed more than $15 million from nine shows. The highest-earning date ($4,797,916) took place on July 14 in Madrid, where a capacity crowd of 48,689 saw the band perform at what has been described as Spain’s most modern stadium, Wanda Metropolitano. The second-biggest concert ($2,311,161) happened on June 30 in Hannover, Germany, where 30,000 fans were packed into the sold-out Messe-Gelände arena.

IRON MAIDEN opened its concerts on the trek with “Aces High” and continuing with “Where Eagles Dare”. Other notable tracks aired during the set included the Blaze Bayley-era classics “The Clansman” and “Sign Of The Cross”, as well as three additional songs that were performed for the first time in years: “For The Greater Good Of God”, “The Wicker Man” and “Flight Of Icarus”.

The concept for the “Legacy Of The Beast” tour was inspired by MAIDEN‘s mobile game and comic book of the same name and the stage set design featured a number of different but interlocking “worlds” with a setlist covering a large selection of 1980s material with a handful of surprises from later albums to add diversity.

Last year, IRON MAIDEN‘s efforts to beat scalpers and take on the resale market were hailed as a huge success, cutting its listings on secondary sites by over 95 percent, according to promoter Live Nation and the band’s management.

A number of anti-scalping measures were utilized for the U.K. leg of MAIDEN‘s 2017 “The Book Of Souls” tour, including extensive use of paperless ticketing. All other legitimate ticket purchases carry the name of the buyer with entry to the venue requiring proof of ID.

MAIDEN‘s “The Book Of Souls” world tour kicked off in early 2016 and hit North America last year. The band’s Mayan-themed set saw Eddie, MAIDEN‘s omnipresent mascot, having his heart torn out of his chest by singer Bruce Dickinson, who threw the heart into the crowd. 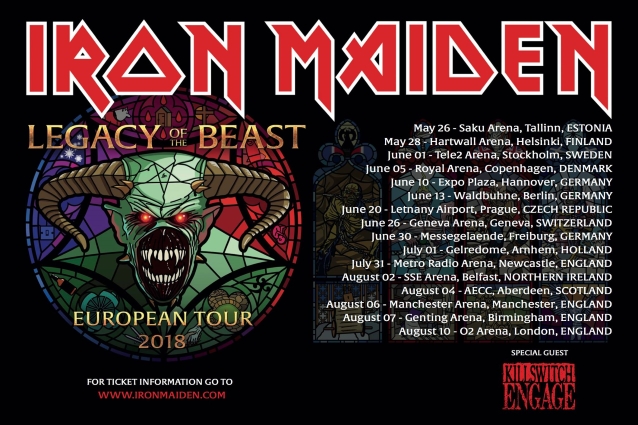