Finland’s Kaaos TV recently conducted an interview with vocalist Anders Fridén and guitarist Björn Gelotte of Swedish metallers IN FLAMES. You can watch the entire chat below. A few excerpts follow (transcribed by BLABBERMOUTH.NET).

On the writing process for IN FLAMES‘ new album, “I, The Mask”:

Björn: “I think we learned a lot from the last time we recorded when we did ‘Battles’. We started working with a producer called Howard Benson and he really brought out some really good stuff in us. We started working in a new way, so to speak. We both were in the same room at the same time writing. From vocal melodies and guitar melodies, that writing process was very different from how we usually have done it before. When we did this record, we had this already. The process was really quick, creative, inspiring and fun, I have to say. So, yeah, it was good.”

On the more guitar-oriented nature of “I, The Mask”:

Björn: “I’d say there’s in the music, there’s probably as much electronic stuff. It’s a matter of production in the end, the mixing of it. We talked about it before, it is more focused on the guitars as it has been in the past. It’s a mixing thing, again. It’s something I’m not unhappy with. [Laughs] I kind of like that, obviously. I think the overall sound is really good. We got lucky working with Chris Lord-Alge for the mix and he and Howard know each other really well. He’s kind of a rock guy and that usually means a lot of guitars.”

On whether “I, The Mask” has elements from IN FLAMES‘ “old” sound, meaning, melodic death metal:

Anders: “This talk about ‘old versus new,’ I feel very old, to me. It’s another IN FLAMES album and what it means to you, it’s what it is to me, which I think is cool. That’s the way it’s supposed to be. We want to make an album that is personal for anyone who is listening to it. This is where we are right now and if more guitars in the mix means more old for some people, then that’s fine. It’s not our intention to make it sound old or new, it’s an intention to make a great, new IN FLAMES album. That’s how we look at it every time. Then, how it comes out on the other end and how people portray it and how people dissect it, it’s out of our hands.”

On whether IN FLAMES goes into every studio album with a specific direction in mind:

Björn: “I think we have sort of a few key words. That’s another thing we talked about earlier, too. There’s no master plan; we kind of know how we sound and what we want to do, but there’s certain words, like we wanted it to sound ‘heavy’ and we wanted it to be ‘big.’ Each and every song has that focus. It’s a bit more up-tempo, but that’s just something that happens in the writing process later, but having a few keywords is important and that’s what we have.”

On Fridén taking vocal lessons prior to the recording of “I, The Mask”:

Anders: “It was Howard who pushed me into doing the vocal lessons. When we did ‘Whoracle’, I did three vocal lessons pretty much to learn how to breathe, then I haven’t really cared about my vocals. I wake up, drink a few beers, then I go onstage. That’s how much I cared about it. He said, ‘Try it. It’s not only good for you. It could actually be fun.’ It did that on ‘Battles’ and I had an amazing experience with my vocal coach. Mark Renk is his name. He works out of Los Angeles and he’s an awesome guy. We formed this great relationship. I learned a lot of things about my own voice from him. Because I’m not trying to become the best singer — I want to master my own instrument. That’s what it is. When it came to this album, I already said ‘I want to do that again, but I want to do it more extensively. I want to do it three times a week or four times a week.’ I went to him for three months, three days a week and that actually helped me become a better singer within IN FLAMES. I can reach a different range and get higher up in the octaves and stuff like that. It’s all for the better. At first, it was really scary being in front of one guy on a piano and start singing, but with this one, the first session we had, we were already up to speed, so for me, it made me appreciate what we do better. It was more fun. I’ll take that back from what me and Mark are doing into the session that me and Björn are doing. It makes that process more fun. I listen more to what he says and we talk about the songs. I’m not, like, ‘Oh, no. This is my department.’ I’m already open for other people’s ideas, which I wasn’t before. It made everything better, to be honest.”

“I, The Mask” will be released on March 1 via Nuclear Blast (worldwide, excluding North America) and Eleven Seven Music (North America). 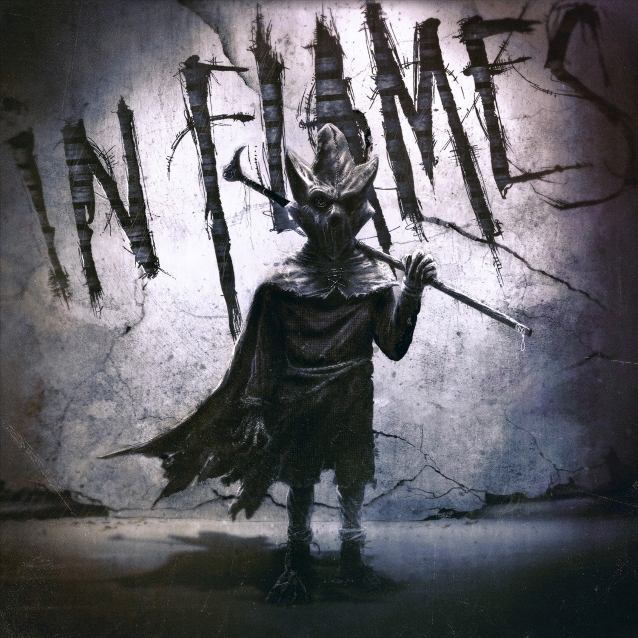