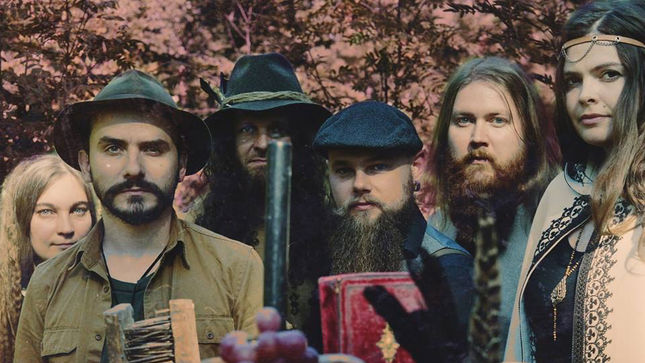 Finland’s Hexvessel have launched a brand new video clip for the song “Drugged Up On The Universe”, taken from their album When We Are Death, out now via Century Media Records. Check it out below.

Singer Mat McNerney comments: “The video references the death of the hippie movement, with a Manson-like shamanic figure, or malevolent spirit. Bringing to life 60s/70s counter culture in an Eyes Wide Shut orgy of drugs, the Alice-like central character takes a spiritual journey. Enticed by the spirit, who has entered her expanded consciousness, her mind expands. She is lead outside and discovers there is a wider universe than the one she knows. It’s a nature mystic metaphor for how that era has influenced the environmental movement which Hexvessel feel a part of. If you let it in, the spirit of nature will find you and expand your consciousness. You don’t need drugs to get high on the nature of the universe! It was directed by Frenchman David Fitt who has previously worked on videos for King Dude for example.”

Hexvessel have also announced a handful of shows in Germany, the Netherlands and Greece. Scroll down for the exact dates.

The Leafmeal Warm-Up Show with Motorowl at Tapir Media in Dortmund on November 4th is a special “Hexvessel Unfurled” showcase: Founding partners Mat McNerney and Marja Konttinen ceremonially unfurl the music of Hexvessel and spirit the fragments into the wind. They will invoke stripped down and acoustic renditions of songs from Hexvessel’s back-catalogue, including previously unheard material, in a darkly intimate and exclusive performance. The band will sell a strictly limited edition of 30 tapes with six previously unreleased “unfurled” tracks at the show. Each tape will have a hand-drawn cover artwork created live by Costin Chioreanu (twilight13media.com).