Legendary rock vocalist Graham Bonnet is back with a new live album and home video captured during his acclaimed performance at Frontiers Rock Festival III in Trezzo (Milan), Italy) on April 24, 2016.

Accompanied by a stellar band, featuring founding member Beth-Ami Heavenstone on bass, South American guitar sensation Conrado Pesinato on lead guitar, and Mark Zonder (known for his work with WARLORD and FATES WARNING) on drums, Bonnet masterfully delivered a thrilling “best-of” set which included songs from his stints with bands such as RAINBOW, MICHAEL SCHENKER GROUP, ALCATRAZZ, IMPELLITTERI, and, of course, his solo material too.

Bonnet says: “It’s been a very long time since I last released a live video, 33 years to be exact, with ALCATRAZZ. Myself and the band were very excited to film and record our performance at the Frontiers Rock Festival for a live album and video and are very happy with the final result!”

Bonnet has a powerful and distinctive vocal style and, indeed, a distinctive image — preferring to let the music, rather than the conventional heavy metal look, do the talking.

The GRAHAM BONNET BAND has spent the last two years touring regularly around the world, and this past winter released an album titled “The Book”. With the band and Bonnet finetuned from all their touring when they got to Frontiers Rock Festival, this stellar set that was captured there makes for a new live album that will blow GRAHAM BONNET BAND fans (and heavy rock fans in general) away!

Bonnet told Roppongi Rocks about GRAHAM BONNET BAND‘s musical direction: “It’s aggressive but it’s not annoyingly aggressive. It’s something you can listen to and sing with it, sing along with. You can listen to the story. There is some hard-hitting stories in there about real life. It’s not made up of dragons and dungeons and whips and chains and stuff. It’s about real things. I have always made up lyrics about real life and experiences that I’ve had. People identify with certain songs and that’s really good. I can’t identify with songs about sex and drugs and rock ‘n’ roll, if you know what I mean. Those sort of silly lyrics. I won’t say who writes silly lyrics. But there are a lot of bands out there, if you read the lyrics, are you kidding me? How old is this person? 12? I like to make up intelligent words along with intelligent arrangements.” 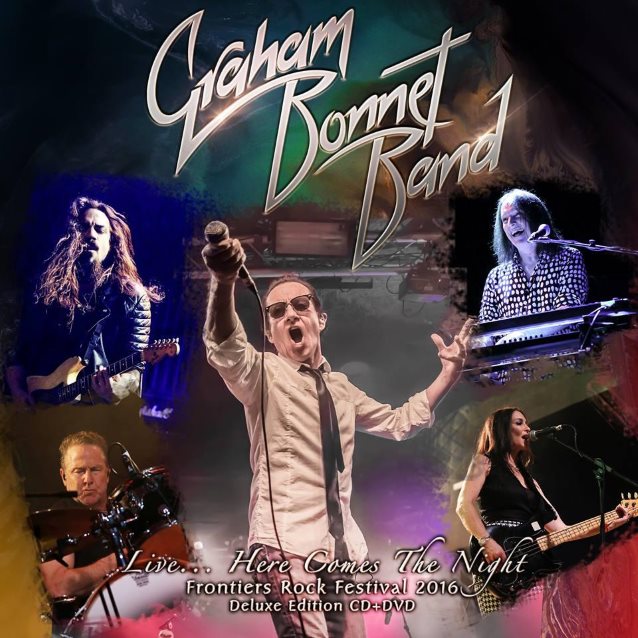