Swedish band GHOST has surprise released the digital edition of a live album called “Ceremony And Devotion”, just hours after posting a video teaser for the set online. It is available for streaming at all premium outlets and for purchase at Amazon and iTunes. The official cover artwork for the disc was revealed in the latest issue of Sweden Rock Magazine. The physical version of the LP will be out on January 19. The band has also streamed the song “Absolution” from the set.

Frontman Tobias Forge — who does all the band’s interviews anonymously as a Nameless Ghoul — told The Pulse Of Radio a while back that he’s always looking to expand GHOST‘s live performances. “The idea has always been, ever since we started, to have a very theatrical show,” he said. “We basically want to be an arena band where you can bring a lot of production and a show where you go through different phases and, you know, a lot of costume changes and more magical tricks and more bombs and more fire and smoke and…more Disney On Ice, in a way.”

The last-ever GHOST concert to allegedly feature Forge‘s onstage persona, Papa Emeritus III, took place on September 30 in Gothenburg, Sweden and ended with the singer apparently being forcibly removed from the stage. A very elderly man wearing a white and gold version of Papa‘s robes and his signature make-up took the stage and addressed the crowd, saying in Italian, “I am Papa Emeritus Zero. The party is over and now a new era begins. The Middle Ages begin now.”

Of course, this is all part of the joke: the band supposedly dismisses the old Papa and recruits a new one on every LP, but they are all Forge, who will no doubt perform as a new Papa Emeritus on the next album cycle.

Forge has been working on the group’s fourth studio album for a tentative April 2018 release. The new disc will follow up 2015’s “Meliora”, which featured the Grammy-winning hit “Cirice”, and last year’s “Popestar” EP, which included the chart-topping “Square Hammer”.

Four former members of GHOST sued Forge earlier this year, accusing him of cheating them out of their rightful share of the group’s profits. Forge countered that they were hired hands and that the band was essentially his project.

The singer hired an all-new lineup of musicians for touring purposes in the first half of 2017, all of whom performed anonymously as Nameless Ghouls. 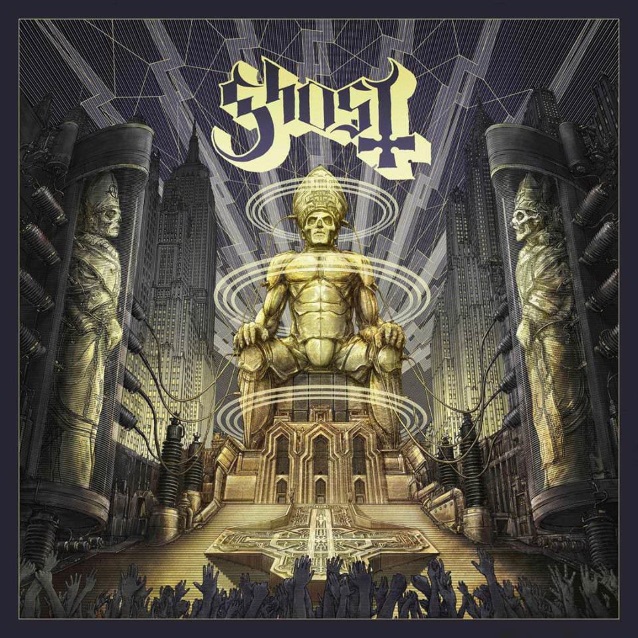