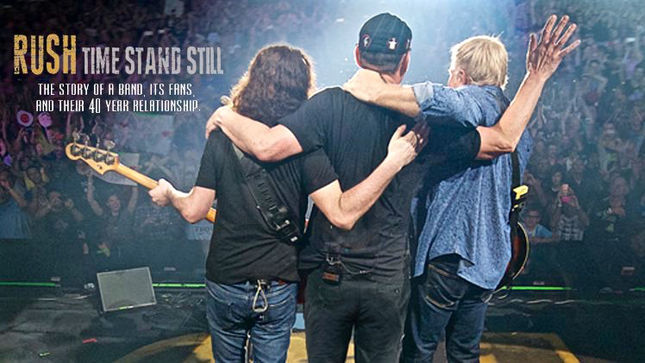 In the clip below, taken from the documentary Rush: Time Stand Still, KISS icon Gene Simmons offers his thoughts on the legendary Canadian band, whom he calls “still one of my favourite bands of all time.”

Back in 2008, Rush guitarist guitarist Alex Lifeson spoke with UGO.com about touring with Simmons and KISS:

UGO.com: Looking back on the early years, I’ve read that Rush toured with KISS in 1975.

Alex Lifeson: “That was our first kind of ‘big tour.’ We had started touring in ’74 – we were opening for a few different bands. But the KISS tour…and this was the start of their career, as well. The tour that we did with them, we opened for them, and we were playing 3,000-5,000 seat halls. They were a new band, and no one had really heard of them. So we did a lot of work with them – we probably toured with them for 60 or 70 shows. Back in those days, we were doing 200 to 250 shows a year anyways. But we toured with them over a fairly long period of time. We were very close and we had a lot of fun. We were both young bands, and quite different from each other – I think that was a nice compliment playing together. But like a lot of things, you sort of drift apart over the years. We stayed in touch for a while, but not so much in the past ten years or so.”

UGO.com: Any specific memories of that tour?

Alex Lifeson: “It was always a crazy scene at the end of tours – they’d plaster us with cream pies, there was always some sort of surprise lurking around a corner! And certainly, there were some fun nights – parties and things like that. They lived a little more of a rock n’ roll lifestyle than we did.”

Due to overwhelming demand, there will be encore screenings of the documentary Rush: Time Stand Still across the US on Thursday, November 17th – click here to check for a theatre near you.

Also on November 17th, there will be a special screening by Planet Rock in London, UK. The event will be hosted by Rush Superfan Darren Redick at Planet Rock studios at 6pm.

The Rush: Time Stand Still documentary will be released on DVD/Blu-Ray on November 18th. In a new article, Rolling Stone reveal the “10 Things We Learned” from the doc.

One of the things they learned is that a tour with anything less than the three members of the classic lineup (Geddy Lee, Alex Lifeson, Neil Peart) is unthinkable. They will never do a show without all three of them.

“It’s not like you just get new members of a band and just go for it,” says Lifeson. “Rush has never been a band like that. We’d never, ever do something like that.” Adds Lee: “We always said that if the three of us aren’t on board, we don’t do a thing. There have been other decisions in our career where the three of us weren’t on board and we didn’t do it. Nothing as profound as ending our touring life, but fair enough. So one guy doesn’t want to do that thing anymore that I love to do. That hurts. But there’s nothing I can do about it and that’s part of the agreement.”

This special theatre event of Rush: Time Stand Still, narrated by Paul Rudd, is a night for passionate and loyal fans to watch together and provides an intimate look into the band’s sold-out R40 tour and the unique relationship we have with you all.

In the video below, Chad Smith speaks on Rush’s 2112 and how it influenced him as an artist:

Watch a teaser from A Salute To Kings:

Catch a special animated short, “The Early Days Of Neil Peart”, by FanToons exclusively when you attend the theatrical screening. A preview can be seen below:

In a recent preview clip from Rolling Stone, Geddy Lee and Alex Lifeson share stories from their mid-Seventies tour with KISS in the documentary. Longtime lighting director Howard Ungerleider recalls that while on the road, Lifeson used to put a paper bag on his head and put his hands through his pants to entertain his bandmates and KISS guitarist Ace Frehley. He called his character “The Bag”.

“Bring the Bag over here,” Lifeson says in a clip, doing an impression of Frehley in a high-pitched voice. “Howie, where’s the Bag?” Lee echoes, referring to the band’s lighting director. They would fool around, much to the consternation of KISS’ Gene Simmons. “Gene was very, very upset with the Bag,” Lifeson recalls, “and that made Ace even happier.”