DETHKLOK, the stars of the Adult Swim series “Metalocalypse”, will perform at this year’s Adult Swim Festival, set to take place November 15-16 at the Banc of California Stadium in Los Angeles. The show will mark DETHKLOK‘s first live appearance since taking part in the 2014 edition of Festival Supreme in L.A.

Asked in a brand new interview with Australia’s “Everblack” podcast if there is a future for DETHKLOK, drummer Gene Hoglan said (hear audio below): “It’s a question that’s better suited for [DETHKLOK leader] Brendon [Small]. However, we never say never. For instance, DETHKLOK has a show booked in November up in Los Angeles. It’s a comedy festival, or music festival, that Adult Swim, the network, is putting on. And the simplest summation that I can come up with for the reason that we’re playing the show is Adult Swim is extending an olive branch, it kind of seems like, to the band for the future. We’ll see what that future might entail.”

He continued: “I know Brendon‘s a busy guy on his own. I would love to, but I don’t have time for it. But everybody loves DETHKLOK; we love DETHKLOK; I know Brendon loves DETHKLOK. And there’s been some time since the band has been able to either play shows or attempt to move forward. That’s why Brendon‘s been concentrating on his GALAKTIKON project, which the last GALAKTIKON album, ‘Become The Storm’, that was essentially a DETHKLOK record. If you ask me, it sure sounded like DETHKLOK, and there are some Nathan Explosion kind of vocals on it. I think that was Brendon‘s… Like, ‘We can’t be DETHKLOK anymore, but we’ve still got music in us, so we’ll have to change the title, change a bit of the scenery around the concept.’ But musically, it had all the same challenges of DETHKLOK.

“You just never know about the future,” Hoglan added. “I wish I knew more about it. But I’ve got a real positive feeling about some things. And that’s about the most I can say about it. But I know Brendon could elaborate. I always feel good about DETHKLOK‘s future. I’m always the one holding out the hope. I know the network was a bunch of fuckers, and things didn’t end up on the best note, but you never know. And so we’ll see what that sort of attitude brings. Hey, you never know. That sometimes brings a lot of positive stuff in the future. So I’m always down for that.”

DETHKLOK features Small, Hoglan, Mike Keneally and Bryan Beller as its real-life members in the studio and on the live stage.

In a 2012 interview with MLive, Small said that he conceptualized DETHKLOK‘s show after watching a live performance of GORILLAZ, another animated band fronted by Damon Albarn of BLUR.

“I always wanted to make a record, and find a way to tour it,” Small said. “I checked out GORILLAZ, who are talented, and have some of the best animation I’ve ever seen, but [because the musicians hid behind a screen, and the audience couldn’t see them,] there was no connection between performer and audience. It was cool and mysterious, but it didn’t give the audience what they want. We don’t look like [DETHKLOK], and we’re not supposed to, but at least you can see us playing. We’re like a pit band in that sense.”

DETHKLOK‘s latest album, “Metalocalypse: Dethklok Dethalbum III”, was released in October 2012 via Williams Street Records. The disc sold around 20,000 copes in the United States to land at position No. 10 on The Billboard 200 chart.

“Dethalbum III” was once again co-produced by Small and Ulrich Wild (“Dethalbum” and “Dethalbum II”). 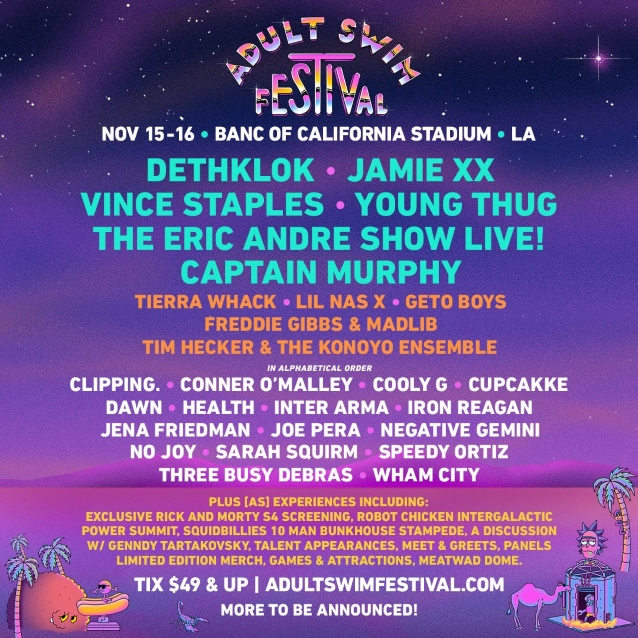