Nick collapsed after suffering a heart attack during the third song of OHM:‘s set on May 21 at The Baked Potato in Studio City, California and was pronounced dead upon arrival at hospital. He was 51 years old.

The Los Angeles County Department of Medical Examiner-Coroner said Menza died of natural causes. The cause of Menza‘s death was listed as hypertensive and atherosclerotic cardiovascular disease.

Menza had reportedly dabbled with drugs in the earlier part of his career but had been completely sober for eight years.

One person who was present at The Baked Potato Saturday night told BLABBERMOUTH.NET: “It appeared to be a seizure but [Nick] stopped breathing. Two patrons took over and began CPR until EMS arrived. EMS worked on him for 25-plus minutes, including adrenaline shots, three shocks and non-stop compressions.”

Menza joined MEGADETH for the 1989 recording “Rust In Peace” and for the next nine years became associated with the band’s “classic” and most profitable era.

Menza hooked up with OHM: last year after the passing of the band’s previous drummer, David Eagle, who suffered a heart attack and had open-heart surgery in May 2015.

Last week, it was announced that Nick would unveil an art collection crafted from the new medium of “rhythm-on-canvas” on June 16. That unveiling has now been postponed to an as-yet-undetermined date.

Menza had been working with art team and publisher SceneFour on the collection titled “Rhythm Hits The Wall”. 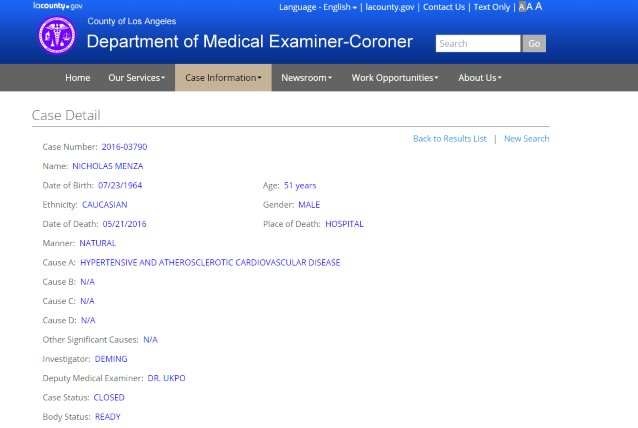