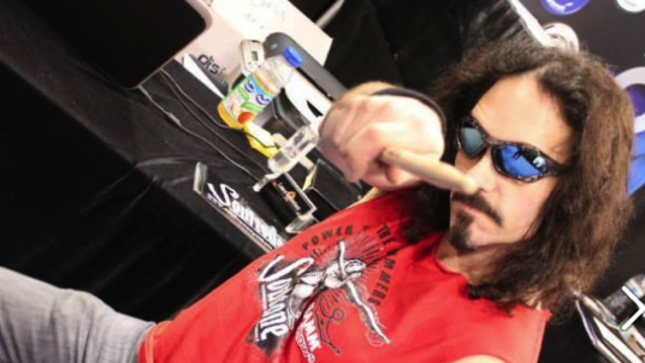 Former Megadeth drummer Nick Menza has checked in following confirmation that Lamb Of God drummer Chris Adler will be perfoming on the next Megadeth album:

“To my fans, I hate disappointing all of you who have been asking and hopeful that Marty Friedman and I would rejoin Dave Mustaine and David Ellefson to resurge the classic Rust In Peace lineup.

I was totally ready and excited to get back in Megadeth. I went to Dave’s house/studio in San Diego this past December and we jammed for the weekend and it was totally cool. We instantly fell right back into our musical groove together.

We have great chemistry. It’s a magical thing! And, yes, that’s me, the ‘mystery’ drummer whose face is hidden in the YouTube videos Justis Mustaine posted as seen below.

A few weeks after this, we all got together with our old manager Ron Laffitte for a dinner meeting at the Anaheim White House restaurant during NAMM. It was great seeing Ron and Marty. We all talked about the plans for a new record and touring and I made it known I was into rejoining and making this my priority. I was pumped, and even went as far as recording drums on five new Megadeth songs Dave had sent me.

As soon as I got home and it was time to sit down and negotiate my terms in writing, I was offered a very unfair deal that was so wrong. They didn’t feel I was worth anything to the band. Dave blocked my emails, changed his number and then, apparently, Ron Laffitte was fired as the band’s manager. Here is one of my favorite bands and a huge part of my life achievements and I was shut out for wanting a fair deal.

I am really blown away how this band conducts business. A band is about a group of people who have respect for one another, sense of loyalty, camaraderie, and most of all honor and trust! I’m not a puppet I have integrity, loyalty, and honor. That’s who I am!

There’s much more to this story, and I could now add the final chapter to my book, Nick Menza Megalife: Countdown To Resurrection, by J. Marshall Craig.

Despite this dark final chapter, I wish Megadeth the heartiest of health, happiness and success with their future plans. As for me, I am moving on with a new band of other fellow former ‘deth members (James LoMenzo and Chris Poland), as well as a few surprise players, and producer .”