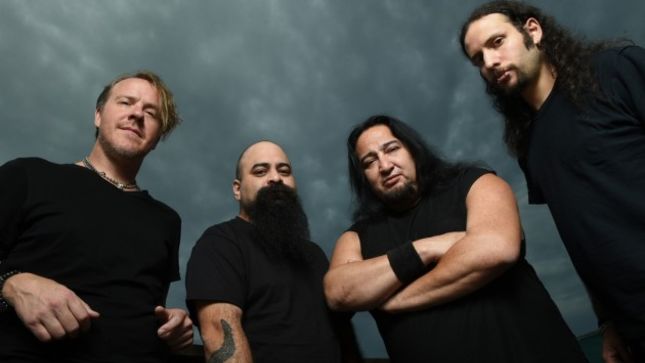 Check out the six previous tour diary installments below:

Fear Factory guitarist Dino Cazares recently spoke with My Global Mind about the band’s new album Genexus, the tour supporting the record, and performing their classic Demanufacture album in its entirety. An excerpt from the interview is available below.

Q: A huge highlight of tonight’s show will be the Demanufacture album in full. I think there’s a lot of people who fell in love with that album twenty years ago.

Dino: “It’s definitely something very special. That’s why we’re here to celebrate it. And that’s why we’re touring the world on it. Some people have said we’re taking a big chance touring on an old record when we just put out a new record. But for us, we wanted to celebrate and honour the record that really was a breakthrough record for us. A lot of people didn’t hear us before Demanufacture. Soul of a New Machine came out and made a little bit of a dent, but as soon as Demanufacture came out, it blew up. We wanted to honour it within the year of the twentieth anniversary. But tonight, at the same time, we’re using this also to launch the new record as well. Playing three or four new songs per night from the new album and Burt [Burton C. Bell] talks about the new record live and introduces it. I think that people get it.”

Q: Several other bands have done similar things with milestones for big albums, so I don’t think it’s too much of a gamble really. So Genexus is doing really well. It even showed up on the Irish charts.

Dino: “It’s really hard for me to keep up with all the charts across the world. We don’t necessarily worry about that kind of stuff. If it happens, that’s great; that’s amazing. If it doesn’t happen, we don’t let that discourage us. We just go on and do our business, and we’re happy that some people really like Genexus. Every time you make a record, you just don’t know how it’s going to be perceived. You’re hoping that it’s going to do well, and so far, Genexus is doing quite well, for us. Especially in this day and age when CD sales have pretty much become obsolete, it’s doing quite well. We’re very excited about that.”