Commented FEAR FACTORY guitarist Dino Cazares: “After 25 years, the soul of this machine is still alive and well.

“[I] can’t wait to do these special shows from where it all started in the West Coast.”

In a recent interview with CrypticRock.com, FEAR FACTORY singer Burton C. Bell stated about the band hitting the quarter-century mark: “I never expected this. I never even hoped for such a journey. It has had its ups and downs, certainly, but [I have] no regrets. Through everything we have been through, it has been quite a ride, quite an experience, quite a life experience, actually, and no, I would not take anything back.”

Bell also talked about his ability to combine clean singing and growling, which has helped distinguish him from the more typical death metal vocal style popular at the start of FEAR FACTORY‘s recording career. He said: “I was never a death metal fan or much of a metal fan at all. I was coming from an industrial, goth, post-punk type of background. Dino was into that too. The band we both liked simultaneously was GODFLESH; that is where we connected. The band we were in prior to FEAR FACTORY was called ULCERATION, and it was a GODFLESH rip-off band. We started a new band, started writing music. We had a few songs and then one day as a joke, Dino was playing this riff, so just for fun I started singing along with it. He stopped me and was like, ‘What are you doing? That sounds great! Do it again.’ [Laughs] So I did it and that song turned out to be ‘Big God/Raped Souls’ off of 1992’s ‘Soul Of A New Machine’. For me, I was imitating GODFLESH, and where Justin Broadrick does a haunting moan, I was actually singing, and that is how it all came about.”

Regarding where he still finds the inspiration to write music and lyrics twenty-five years into FEAR FACTORY‘s career, Bell said: “There is so much passion. I love what I do, and there is plenty in this world to be angry at. Shit happens daily. You think, ‘What the fuck!’ I get disgusted with humanity daily. It is, like, how can we do this to ourselves? ”

He continued: “I will always have that passion to translate into FEAR FACTORY. It is a sad state of affairs, but it is true. I have been around long enough to see things come and go and come back around again.”

Bell went on to say: “You never want to lose your identity, and you want to go back and see what the best things were or still are about you, because you sometimes lose sight. You learn from new things as well, and you take new elements and you blend them in, not to change you, but to enhance you. 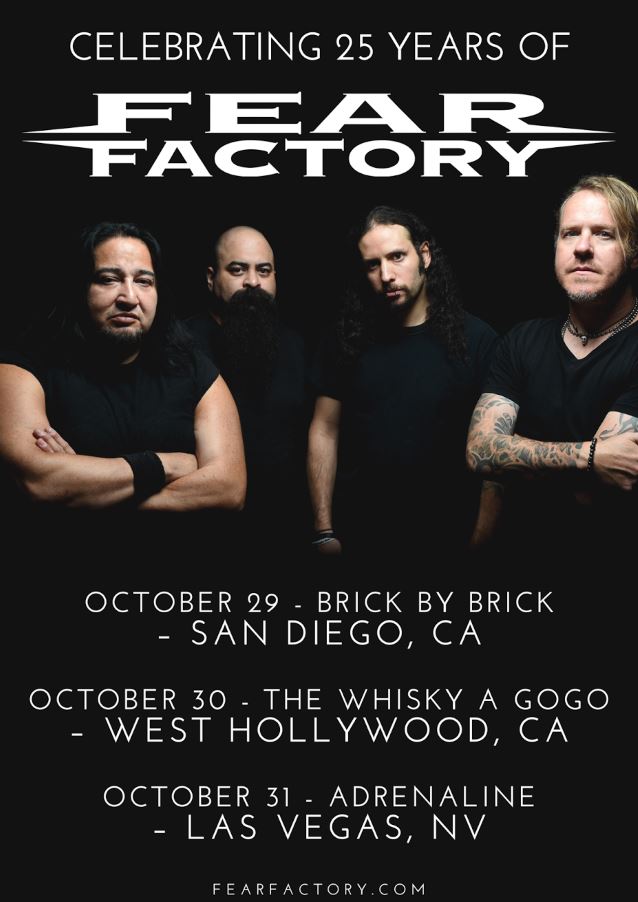