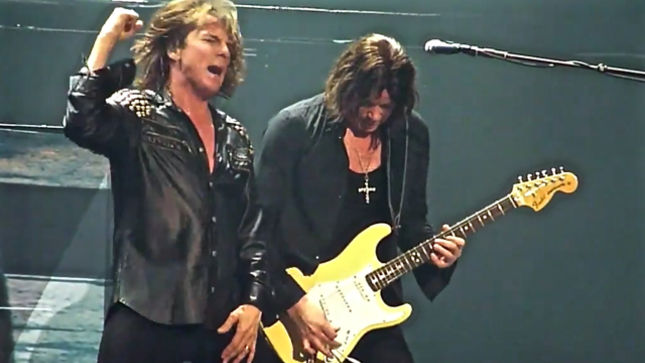 RockMeeting has uploaded quality video footage from Europe’s December 4th show at Zénith in Toulouse, France. Check it out below:

Billboard.com recently reported that Europe’s appearance in a GEICO ad continues to pay dividends for the band, as “The Final Countdown” hit No. 1 on Billboard and Clio Music’s Top Commercials Chart, powered by Shazam, for the month of October.

Using tagging data from Shazam, as well as sales and streaming information tracked by Nielsen Music, Billboard partners with Clio Music each month to present a chart ranking the top songs in commercials. Rankings exclude any song that has recently charted within the top 40 of the Billboard Hot 100.

“The Final Countdown” leaps 4-1 on the October Top Commercials chart as the rock band’s ad in the insurance company’s “It’s What You Do” campaign managed 12,000 Shazam tags, up from 11,000 last month. It rises with 28,000 in digital sales and 5.8 million US streams, up from 20,000 and 3.7 million, respectively, in September. The song spent four weeks atop Billboard’s Hard Rock Digital Songs chart, sparked by its newfound attention, marking the band’s first #1 on a Billboard chart. The anthem reached #8 on the Hot 100 in 1987.

Europe have revealed their plans for 2016, which include work on a brand new studio album, and some special events to celebrate the 30th anniversary of the release of their breakthrough album, The Final Countdown.

Speaking exclusively to Gigs And Festivals, singer Joey Tempest discussed planning a new release in 2017 – “we’re looking at booking some studio time in September next year” – and plans to celebrate the three-decade milestone of The Final Countdown in a suitably epic way.

Speaking about the anniversary, Tempest revealed that Europe will be playing the album in its entirety at a few select shows: “There’ll be a few shows regarding the anniversary of the The Final Countdown [in 2016]”.

Read more at Gigs And Festivals.

Europe’s place as a legendary hard rock band was platinum-stamped early in their career. Having enjoyed an explosive period of worldwide success in the ‘80s (under-pinned by their hit album and single The Final Countdown), 2015’s War Of Kings has seen them take full advantage of the global groundwork Europe have keenly re-established over the last few years.

Check out the first taste from the release – “Nothin’ To Ya” – below:

Joey Tempest states, “Very excited to have the War Of Kings Special Edition coming out with our Wacken Festival performance as bonus disc and so great to soon be back in the USA after our very successful east coast shows earlier this year – covering a lot more States this time.. The War Of Kings tour continues!” 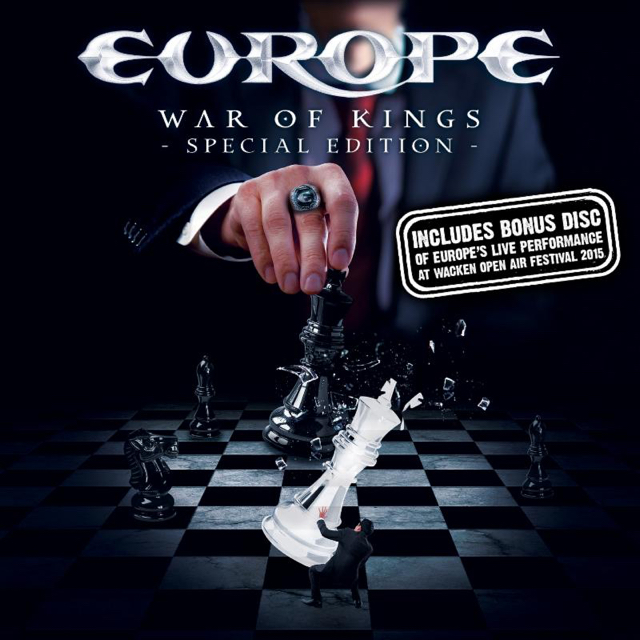 In celebration of this release, Europe is announcing the War Of Kings US Tour 2016. The tour begins in San Jose, CA on January 19th, and hits 16 cities before coming to a close in Atlanta, GA on February 6th. General on-sale begins next Friday, October 23rd at 9 AM, PT/12 PM, ET via all major ticketing sites or Europetheband.com. 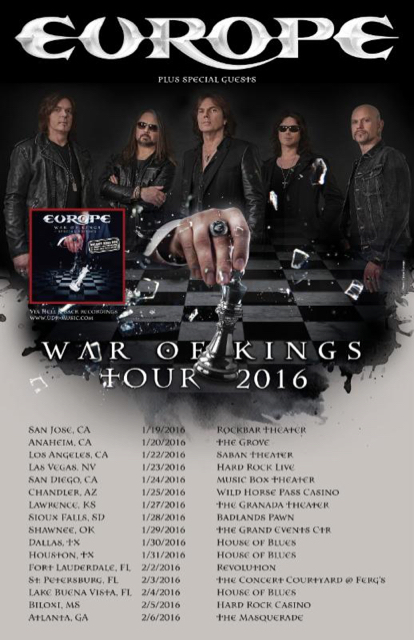