CINDERELLA bassist Eric Brittingham was interviewed on a recent edition of the “Talk Toomey” podcast. You can now listen to the chat using the widget below.

He continued: “It went from just doing, like, whatever just to fill the time. [I thought] ‘[Tom‘s] solo record’s coming out, so I guess we’re not touring this year. I guess we’ll do it next year.’ And here’s four years later, and it’s, like, okay, I’m still kind of playing… I’m playing in four different freakin’ projects at the moment — I’ve got a residency, I’ve got a southern rock thing, I’ve got an original thing, a power-trio thing I’m doing… It’s, like, I’m just making my ends meet.”

Eric added: “If [Tom] wants to do a tour [with CINDERELLA], I’m in. I’m glad that I didn’t hold my breath. I’d be blue now. [Laughs] Like I said, Tom‘s having fun doing what he’s doing, so I guess, all in all, I’m looking to do something more permanent, I guess, too. I don’t know what that would be, but… We’ll see. If any bands are out there that are looking for a permanent bass player, apparently I am free. [Laughs]”

CINDERELLA hasn’t released an album since 1994, when “Still Climbing” came out.

In a 2011 interview SCTimes.com, Eric explained why there was little incentive for CINDERELLA to make a new studio record. He said: “In the musical climate these days and the way we like to do things, it’s not really worth doing it anymore. Our last record cost $1.2 million to make and the cheapest record we’ve ever made was $400,000. You can’t do that these days because no one even sells $400,000 worth of records, CDs or downloads. Everything’s changed. Everyone makes records in their bedrooms basically for next to nothing and in my opinion, most of them sound like it. That’s not what we’re about.” 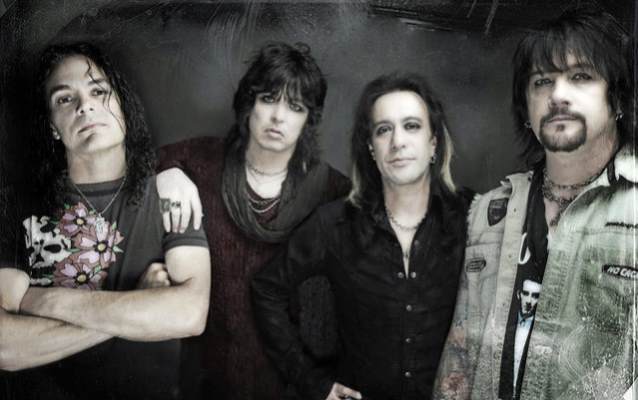