ENTOMBED invites you to hear the unique experience of the band performing its second album “Clandestine” in full live for the first time ever for the album’s 25th anniversary on November 12, 2016 at Malmö Live in Malmö, Sweden.

Threeman Recordings presents “Act 2: The Entombed” performance — a concert in two acts based entirely on the Swedish band’s acclaimed album “Clandestine” from 1991. It is a unique concert where the pioneering album is played from beginning to end. From the opening track “Living Dead” to closer “Through The Collonades”. In the first act, the Malmö Symphony Orchestra And Choir performs “Clandestine”, arranged for orchestra by Thomas Von Wachenfeldt (WACHENFELDT), with the original members from ENTOMBED sitting in as part of the ensemble. In the second act, the band performs the entire album live in the original version for the very first time.

Hellid comments: “It is amazing to experience the musical journey with an orchestra and we really enjoyed the experience.”

Conductor Josef Rhedin adds: “Allowing ENTOMBED‘s suggestive music to meet Symphony Orchestra And Choir is a very creative and exciting concept. Composer Thomas Von Wachenfeldt‘s arrangement contains challenges for both orchestral musicians and for me as a conductor, as the starting point has been to interpret the ‘Clandestine’ in a classical, symphonic format, rather than plank the music outright.”

“Clandestine – Live” will be released on CD, CD bundle with exclusive t-shirt and 2LP 180-gram deluxe vinyl including a poster on Threeman Recordings on May 17. Pre-order here.

The ENTOMBED band that performed at Malmö Live is not to be confused with ENTOMBED A.D., which features vocalist Lars Göran Petrov alongside Olle Dahlstedt (drums), Nico Elgstrand (guitar) and Guilherme Miranda (guitar).

Hellid and Petrov have been embroiled in a legal battle over the ENTOMBED name for several years. 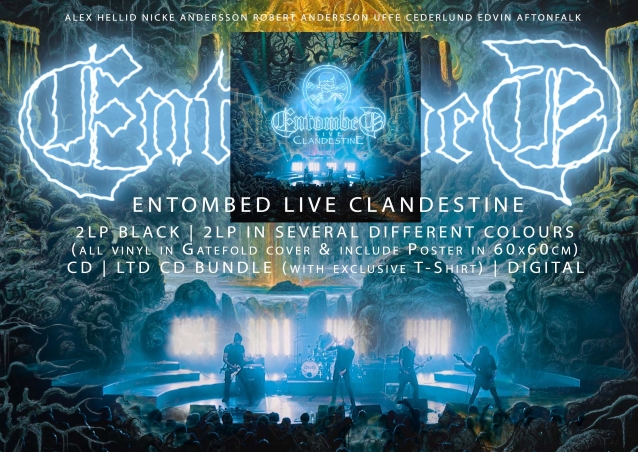