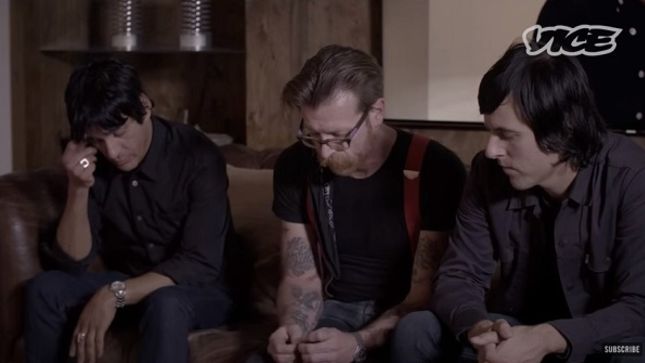 VICE.com has uploaded the full interview with Eagles Of Death Metal discussing the Paris terrorist attack on Friday, November 13 during their concert at the Bataclan.

A documentary about the Eagles Of Death Metal has been pulled from the International Documentary Film Festival in Amsterdam, reports BBC.com.

Screenings have been cancelled of The Redemption Of The Devil, which follows band frontman Jesse Hughes in the build up to the release of their new album.

Gunmen killed 89 people at the band’s gig at the Bataclan concert hall in the Paris attacks. The band escaped, but members of their crew and record company were killed.

The documentary, made by director Alex Hoffman, follows the band’s charismatic, hard-living frontman as he hits 40, becomes ordained as a Catholic minister and ponders a future in politics. The BBC understands it was pulled because the timing felt inappropriate.

Earlier this week the band issued their first statement about the attack and said they were “bonded in grief with the victims, the fans… and all those affected by terrorism”. They said they were “horrified and still trying to come to terms with what happened in France” and all shows were on hold until further notice.