Progressive music titans DREAM THEATER are currently in the middle of a successful European tour. With three weeks left on that run, the band is turning its attention back to North America with the announcement of the next leg of the acclaimed “The Distance Over Time Tour – Celebrating 20 Years of Scenes From A Memory”. The next leg of the tour will kick off at the end of September and run through mid-November. The 27-date trek will see the band making stops in Louisville, Kentucky; Cleveland, Ohio; Baltimore, Maryland; Long Island, New York; and San Jose, California, to name a few.

The first leg of tour gathered plenty of critical acclaim and fan praise due in large part to the diverse setlist the band created. DREAM THEATER featured tracks from its latest release, “Distance Over Time” and selections from their 30-year career along with a nightly celebration of the 20th anniversary of their seminal concept album “Metropolis Part 2: Scenes From A Memory” that the band performed in its entirety. The band will continue that trend on the fall tour to create an evening of over two hours and 45 minutes of DREAM THEATER at their masterful best making this a concert event to not be missed.

When DREAM THEATER‘s “Distance Over Time” tour was first announced, guitarist John Petrucci told Rolling Stone: “The tour is going to be ‘An Evening With,’ and part of the evening will be playing some of the new record and some older songs in our catalog, and then also playing ‘Scenes From A Memory’ in its entirety. So it going to be a lot of fun. And that was a really important record for us, speaking of storytelling and all that. Because it was our first concept record.”

Petrucci said that “Metropolis Pt. 2” was significant for him because “it was our first album with [keyboardist] Jordan [Rudess], so that was important. And it was the first album where we didn’t use an outside producer. I remember back then having a conversation with Mike [original DREAM THEATER drummer Mike Portnoy] where we said, ‘Let’s not do that anymore. Let’s produce ourselves.’ And we basically have ever since. So in that respect, ‘Scenes From A Memory’ might have actually been a record that was a reaction to the previous one. And then we also figured that we hadn’t done a concept album yet, and we decided that it was time. It was like, let’s make our ‘Operation: Mindcrime’, our ‘Tommy’, our ‘The Wall’. It was definitely a conscious decision to do something bold and new and different.”

“Distance Over Time” marks DREAM THEATER‘s first album for Sony Music‘s progressive imprint InsideOut Music. The group spent the past 25 years recording under various labels in the Warner Music Group system, most recently Roadrunner Records, which released five albums by the band between 2007 and 2016. 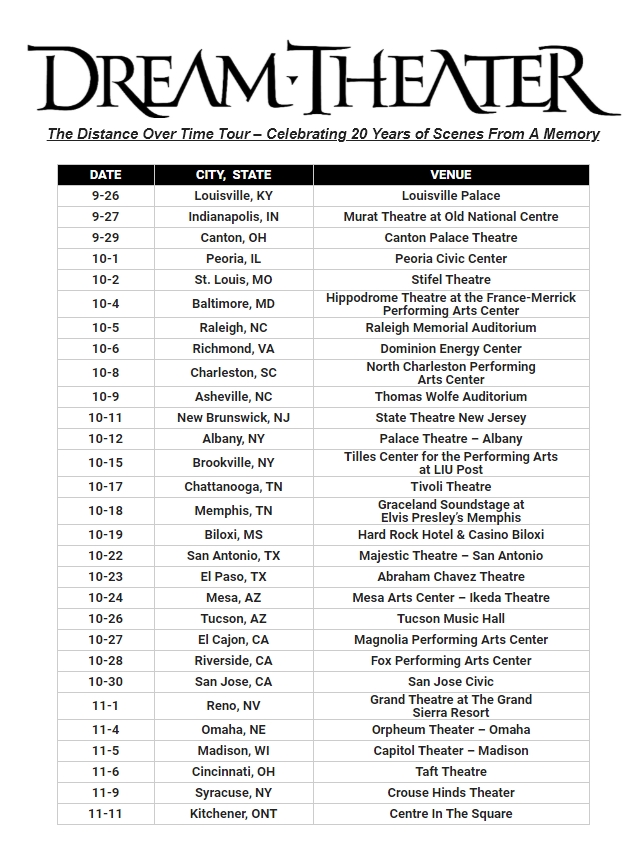