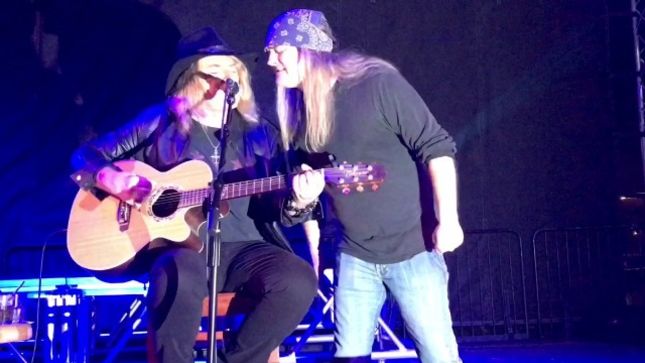 On November 17th, Dokken frontman Don Dokken performed a solo acoustic show in Houston, Texas at the Proof Rooftop Lounge. During “In My Dreams” he was joined by former Skid Row vocalist Johnny Solinger. Fan-filmed video from the show is available below.

Don Dokken, George Lynch, Jeff Pilson and “Wild” Mick Brown recently reunited as Dokken for six shows in Japan. The brief trek began with a single US date on September 30th at Badlands Pawn Guns Gold and Rock ‘N’ Roll, a sold-out show that was filmed for a possible video release later this year. The group then headed to Japan for Unleashed In The East tour dates — six shows between October 5th and 12th. The band has posted a “thank you” video clip on their official YouTube Channel, which can be viewed below.

Fan-filmed video from Dokken’s October 6th show at Namba Hatch in Osaka in available below.

UCR spoke with vocalist Don Dokken and bassist Jeff Pilson in separate interviews to get their thoughts on the reunion shows. As fans are aware, there have been several attempts in the past few years to launch a reunion, including one that found the band members getting together in Pilson’s studio and working on three new songs.

“That was about three or four years ago and I honestly don’t remember how the songs went, I don’t remember what they were,” Dokken says. “I don’t remember the lyrics, I don’t remember anything. They had some ideas and George was like, “What do you think of this?” And I go, “Oh, that’s pretty cool.” It was just like a brainstorming session, and Jeff goes, “Well, how about we do this for the chorus?” We did that and we spent a day and did three songs, just roughed them out and that was the end of it. We never took it to the next level.”

New music is again on the agenda as part of the reunion. Pilson says initial work had been done on a new song, which is still in development. “So far it’s just the music,” he says. “It’s very Dokken sounding. It’s very tricky to try and come up with something that sounds authentic but sounds sincere, and I think we did it. We kind of just let all go and let our inhibitions fly and it came out.”

But a few weeks later, Dokken revealed that with things coming down to the wire, he wasn’t sure what would happen with the new song. “Jeff and George wrote a riff and some music, and they sent it to me. I’ve been super-busy and I’ve been trying to write lyrics. The song really hasn’t spoken to me as much, so I let Mick take a crack at it,” Dokken explains. “Mick wrote an entire lyric and the whole song and it’s really good, but it’s too high. It’s just out of everybody’s range. So that needs to be taken into consideration. I think it was written in the wrong key for me. You’d have to either sing really low, and it wouldn’t sound good, or like super-high, and I’m stuck in the middle. Jeff and I are going to try to get together.”