DEMONS & WIZARDS, the side project of ICED EARTH mainman Jon Schaffer and BLIND GUARDIAN singer Hansi Kürsch, has released remastered versions of its first two albums on all digital platforms.

As of today, the two acclaimed albums “Demons & Wizards” (2000) and “Touched By The Crimson King” (2005) are finally available again. Remastered by Chris “Zeuss” Harris (ICED EARTH, QUEENSRŸCHE, SANCTUARY), these two records will also be released as expanded deluxe editions on June 7. The expanded editions will feature liner notes by Kürsch and Schaffer as well as bonus material and will be released as a limited-edition digipak, deluxe 2LP with etching and LP booklet as well as digital deluxe editions.

DEMONS & WIZARDS is currently recording its as-yet-untitled third studio LP, which is scheduled to be released in early 2020.

Schaffer spoke about the progress of the songwriting sessions for the follow-up to “Touched By The Crimson King” during a December 2018 appearance on the ICED EARTH-centric podcast “Podcast In Stone”. He said: “I have written some of the best instrumental pieces in my entire career in the last few weeks, and I’m very, very excited to hear what Hansi does on top of these things. So, the feeling is really good. He’s very into what I sent him.

“We had three songs going that we started working on a few years ago, but everything got busy for me with ICED EARTH and him with BLIND GUARDIAN,” Jon continued. “But I’m stoked with the stuff that I’ve written — I mean, very, very happy. We’re gonna be taking people on a journey, man — for sure.”

“Touched By The Crimson King” was partially based on the “The Dark Tower” series of books (written by Stephen King) in which the Crimson King is the main antagonist. The album was released in Japan in September 2005 with the following bonus tracks: “Lunar Lament”, “Wicked Witch” (slow version) and “Spatial Architects”. The CD also included the “Terror Train” video. The disc featured an appearance by HALFORD and SEBASTIAN BACH drummer Bobby Jarzombek.

Schaffer said in a 2009 interview that he felt “Touched By The Crimson King” was a bit rushed and he was determined to do things differently next time around. “We had this window of opportunity where we had to get it done and we kind of let time dictate the schedule instead of our feelings, and that was probably a mistake,” he explained. “I mean, I’m proud of that record and it sold killer and it’s a good album, but I think Hansi and I are capable of a lot more, especially when we get back to the root reasons of why we did this thing together.” 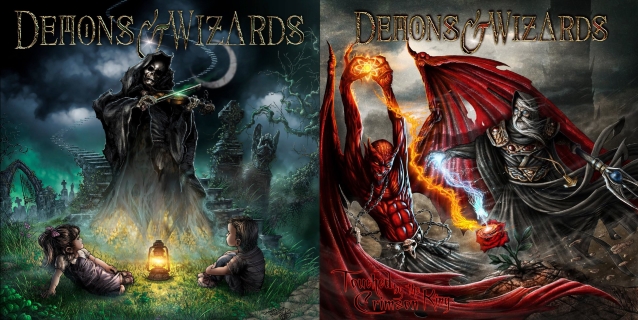