Andrew McKaysmith of Australia’s “Scars And Guitars” podcast recently conducted an interview with lyricist/guitarist Demonaz (real name Harald Nævdal) of Norwegian black metallers IMMORTAL. You can listen to the entire chat via the Whooshkaa widget below. A few excerpts follow (transcribed by BLABBERMOUTH.NET).

Demonaz: “I actually talked to Metal Hammer Greece before you called and the guy said the same. He asked me where I would put this album if I could go back. I told him I would put it between ‘At The Heart Of Winter’ and ‘Blizzard Beasts’ maybe, in a way, because I wanted this album to have the energy. It was like, I guess you’re going to ask me what about what happened to the band in 2014-15, but we can talk about that later, but I think it was time to just concentrate on the music. It was really delicious to do that after all the things that happened to us. I really wanted to go back to the time when we had the real energy and when it was more freedom to think about the band only and nothing else and just block out the world and say that we’re going to put together the album and I don’t care about anyone on the outside. It made the album more vital, more furious, more like pushing things to the limit because I felt the freedom. This time, it was only me writing all the riffs. I came up with the ideas for the songs, so, I felt an enormous freedom just to do whatever was necessary to make a great album and don’t think about anybody else.”

On whether people are noticing “Northern Chaos Gods” sounds different because he’s re-taken over IMMORTAL‘s guitar spot from the departed Abbath:

Demonaz: “You know, I was the main guitarist. If you go back, you could say, from the beginning, I came from this band called AMPUTATION, which was my band. I wrote all the songs there and it was a death/thrash band, death metal band. When I was doing this, I was thinking, ‘Well, it gets a bit monotone’ because I didn’t have the experience of many years of writing at that time. I was very young. Then, I wanted to make a new band. I wanted to make the ultimate band. I had the name IMMORTAL and ambition. Then I met Abbath. I saw OLD FUNERAL. They were a local band playing in Bergen. I heard the voice of Abbath and I knew him a bit. I met him and I knew he was into the same kind of music that I was. I met him and I asked if he wanted to join me. I told him about my plans, that I don’t want to play on the weekends. I want to make a proper band and don’t give a shit about the rest of the world and do this forever. He wanted to join me, but he had to finish up his concerts with OLD FUNERAL. It was three or four concerts, one in Finland, I think, then, he would join me. So, I had an idea to find this drummer, which was Armaggeda. He was a guy I went to class with at school from our younger years. We knocked at his door and we asked if he wanted to play with us. That’s how IMMORTAL came to in the beginning. We did some demos. It was death metal-influenced, but my interest was in BATHORY, VENOM, CELTIC FROST and HELLHAMMER and that kind of music. The same with Abbath, so we changed afterwards. But my guitar playing, which was the question, started with Tony Iommi. That was very slow, right? The BLACK SABBATH thing, but when I came into thrash metal and I listened to METALLICA, the riffing on the first METALLICA album [‘Kill ‘Em All’], was really fascinating me. It was fast. It was furious. It was something new. They were breaking some limits and after that, it was like no return. The same with SLAYER. SLAYER had the fast picking and it became something I really rehearsed and worked on. I always remember Abbath said to me, ‘Fuck, nobody can pick as fast as you can.’ It’s not to brag about anything, but that was how, in a way, I started to play. I wanted to play fast and make a special kind of playing. The first four IMMORTAL albums, Abbath played the bass; he was not a guitarist. But he was with me, also, in the songs, composing and making riffs and he had a lot of brilliant ideas. He’s a very talented musician. But we are different. He came from something else when it comes to the instrument. While I was three years older than him and I also helped a lot with the guitar playing. He was young when I met him. He was not experienced and I was three years [older] at that time of 20 years, when you are 20, there a lot of years. It was different. So, I wanted the music to be faster. When we made ‘Pure Holocaust’, I wanted it to be faster than ‘Diabolical Fullmoon Mysticism’. When we made ‘Battles In The North’, I wanted to break the speed limit on that one, too. And when we did ‘Blizzard Beasts’, I riffed my arms off. [Laughs]”

On whether Abbath took music originally intended for IMMORTAL and used it for his 2016 self-titled solo debut:

Demonaz: “We made nearly all the songs and pre-production for all those songs. When the conflict ended, before that, he left and took with him — he made a lot of those riffs and some of those songs were his major parts. That’s all right. We worked on this together with the structure and everything. When he decided to leave the band, suddenly, he found some members without telling us and because we were in the middle of this disagreement and back-and-forth, then he said goodbye in a way by taking those songs and leaving us. He didn’t take my lyrics. I think that was out of respect in some way. I had to start from scratch in May of 2015 after he left and I wrote ‘Northern Chaos Gods’, the first song. It was the first song I wrote just after [Abbath left].

“Northern Chaos Gods” was released July 6 via Nuclear Blast. The disc was produced by Peter Tägtgren (Abyss Studio), who also helmed IMMORTAL‘s “At The Heart Of Winter”, “Damned In Black”, “Sons Of Northern Darkness” and “All Shall Fall” LPs. 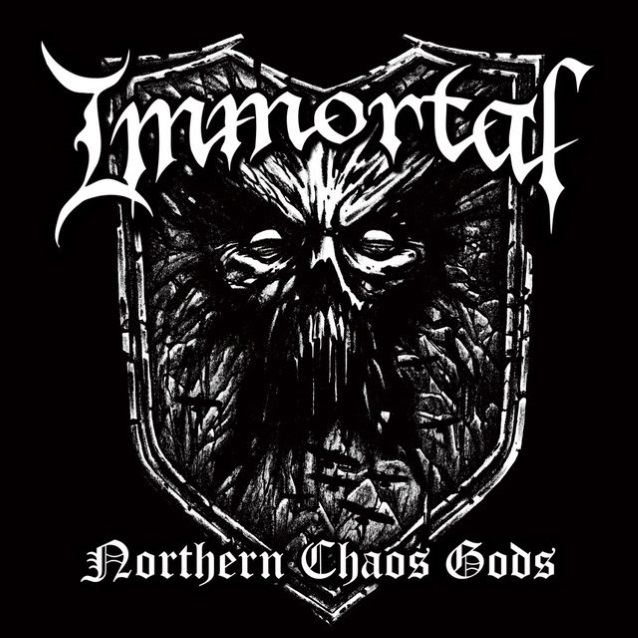