DEMON HUNTER will perform more than 20 songs each night at a series of special shows this summer.

“An Evening With Demon Hunter” is an epic mixture of fan favorite anthems and deep cuts that have never been performed live. Both electric and acoustic presentations will feature songs that span the band’s 10 studio albums, including their most recent, “War” and “Peace”, which were released simultaneously earlier this year.

“We’re building a show that’s unlike anything we’ve done before,” vocalist/co-founder Ryan Clark explained. “We’ll have video installations, created specifically for this tour, during set changes. We are planning the biggest lighting/staging production we’ve ever done, surpassing even the ‘Stronger Than Hell’ tour we did back in the day.”

“An Evening With Demon Hunter” will arrive in 10 cities across North America, with VIP ticket packages available through SoundRink. The tour concludes with a more traditional festival-length set at Louder Than Life in Louisville, Kentucky, alongside genre titans GUNS N’ ROSES, SLIPKNOT, DISTURBED and BREAKING BENJAMIN.

“No opening bands, just an entire night of DH mania,” Clark added. “Whether you’ve seen DEMON HUNTER in the past or not, you won’t want to miss this.” 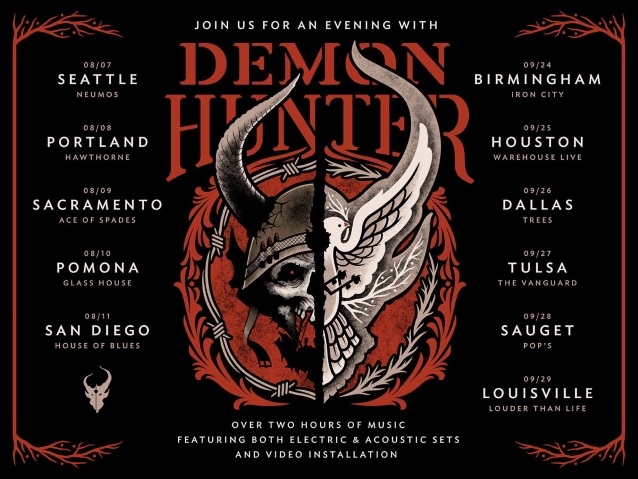