On May 8, Capital Chaos TV conducted an interview with vocalist Charlotte Wessels of Dutch symphonic metallers DELAIN. You can now watch the chat below.

Asked if she reads reviews of her band or comments on heavy metal web sites about her, Charlotte said: “I do read reviews, because when we do a good show, or when we do a bad show, and I see a review of that one coming by, I’m, like, curious to see how it was for the audience. A for gossip sites… Sometimes I do read them because sometimes the comments are just so hilarious. I once made a collection about the most offensive things that were said about me on one of the larger music [sites]… one of the metal gossip sites. And it was just obnoxious, really. But at one point it just becomes hilarious. Like, I don’t let it get to me. I just save it in my vault of, if anyone says sexism doesn’t exist in the metal world, I go, like, ‘Well, here you are!'”

Wessels told RAMzine earlier this year that she thinks sexism “exists everywhere. I don’t necessarily think that it exists more in the music industry than elsewhere,” she explained. “Metal in particular is an interesting genre, because it has always been associated with some very masculine traits. But if you look at the complete picture, if you consider a hundred years ago when we were not even allowed to enter music schools, then I think that we’re actually catching up pretty quickly. And, of course, there is still some things. For example, the fact that we have a second guitarist now [who is a female]. Everyone keeps asking me, ‘Hey, Charlotte, how is it to have another woman in the band?’ And I’m, like, ‘Please just ask me how it is to have another guitarist in the band. It does her so much more justice.'”

She continued: “So, of course it’s there, but it’s everywhere, and it just depends on also how you portray yourself and what you do.”

DELAIN‘s co-headlining tour with HAMMERFALL wraps up on May 18 in Atlanta, Georgia. This trek marks DELAIN‘s first run of U.S. dates in support of its new album, “Moonbathers”, which was released last August.

As previously reported, DELAIN will take part in a very special run of shows in October, dubbed the “Danse Macabre” tour. Joining the band for this exclusive set of dates is longtime friend and collaborator, NIGHTWISH lynchpin Marco Hietala. 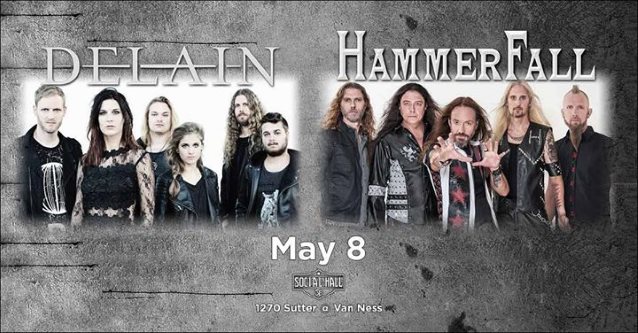