Legendary rockers DEEP PURPLE have released a 30-second trailer for their upcoming studio album, “inFinite”, due in early 2017 via earMUSIC. The album’s first single will be made available on January 20.

The follow-up to 2013’s “Now What?!”, “inFinite” was tracked in February at a studio in Nashville, Tennessee and was once again helmed by Bob Ezrin, who has previously worked with KISS, PINK FLOYD, PETER GABRIEL, ALICE COOPER and KANSAS, among others.

DEEP PURPLE singer Ian Gillan recently told Antihero magazine about the PURPLE songwriting process: “DEEP PURPLE was different than any other kind of writing I do with other people. DEEP PURPLE is primarily an instrumental band, and the routine is we book [time] in a studio somewhere, and the [other] guys [in the band] come in at noon. They start jamming and they work ’till six o’clock, take a break at three for a cup of tea and then do that every day. Roger [Glover, bass] and I listen to the music and clock out the occasional bit and think that might be okay for a tune on the album or something. Then we start refocusing on making arrangements and how to develop the song. Then when it is all tucked away, I start thinking about the lyrics and the tunes. There is no point before they get literally torn up every day because everything changes every day. There’s no shortage of things to write about lyrically. There is no point trying to create a tune on something that’s going to change in a couple of hours. That’s how it worked with PURPLE. This is primarily an instrumental band. I just climb on board and write it along.”

DEEP PURPLE recently announced the “The Long Goodbye Tour”, set to take place at the end of 2017.

The tour name fuels speculation that DEEP PURPLE is planning to retire from the road after travelling the globe countless times over the course of a nearly five-decade career.

PURPLE drummer Ian Paice suffered a minor stroke last year, forcing him to miss the band’s shows in Sweden and Denmark — the first time his medical condition prevented him from performing with the group.

Support on the trek will come from Swedish hard rockers EUROPE.

Tickets go on sale Friday, December 9 at 9 a.m. from www.aeglive.co.uk.

DEEP PURPLE — which has been eligible for induction into the Rock And Roll Hall Of Fame for two decades now — finally entered the Rock Hall as part of the class of 2016. The band’s first three lineups were inducted, including drummer Ian Paice, guitarist Ritchie Blackmore, late keyboardist Jon Lord, and various singers and bassists — Rod Evans; Ian Gillan and Roger Glover; and David Coverdale and Glenn Hughes. 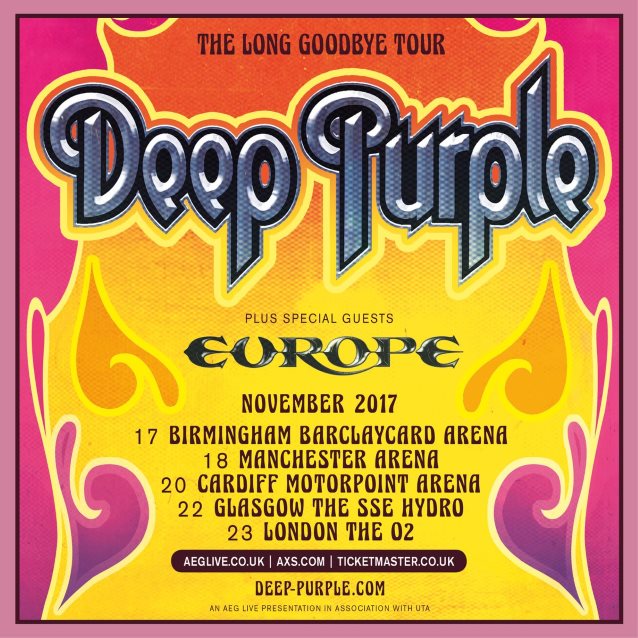