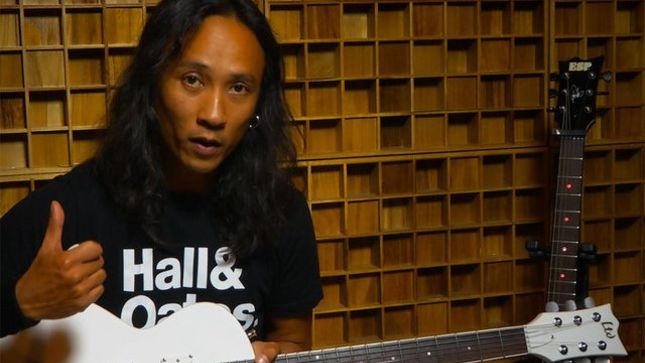 Death Angel guitarits Ted Aguilar is featured ina new inteview with AXS.com discussing the band’s tour with Slayer and Anthrax, and their new album The Evil Divide. An excerpt is available below.

AXS: I know that doing these kinds of interviews you get asked the same questions over and over again, so I’m curious if there’s something that you’d like to get asked about but don’t?

Ted: “Yeah, I’ve seen questions like, ‘If you could ask your favorite band a question what would it be?’ and it’s usually like, ‘How did you write this song?’ and things like that. But if I had a chance to ask James and Lars of Metallica one question, I’d ask them, ‘What’s the best business advice that you’d give to a band in this day and age of the music industry on how to succeed in a music career?’ Because they’re a metal band that played by their own rules and succeeded, and they’re still successful with what they do. They made music a career and that’s really inspiring because most musicians are not business savvy, and a lot of musicians do get ripped off. We’ve all heard stories of bands getting ripped off – Black Sabbath, Billy Joel, all these bands that get so successful but at the end of the day they end up going bankrupt because the money was mismanaged. And Metallica is a band who I think knows exactly what’s going on. They know how to be successful in music but without having to compromise who they are and what they are. So that’s what I’d like to ask them because if a lot of bands thought the way they did, metal would be very successful to this day – maybe even as successful as hip-hop. And Metallica was successful in the ’90s when metal went underground, they were able to sustain and that goes to show that they stood the test of time – even through ups and downs. Like with any business, some go bankrupt and some sustain, and they did it. And on the business end they did it perfectly. Musically, of course everyone’s going to come back and go ‘The first four albums that they put out were the greatest, and in the’ 90s they weren’t the greatest,’ but as a musician myself I look back and I might not be into what they released in the ’90s but that’s where their heads were at, musically, and so that’s what they wrote. And I have to respect that as a musician because you push the boundaries a little bit and want to do something different instead of releasing the same old stuff. Musically, and on the business end, I highly respect them.”

Death Angel recently uploaded a new video in support of their fan club, The Pack. Check out the video below, and join The Pack at this location.

Death Angel, recently performed live on the EMGtv stage. Off their recent album, The Evil Divide, watch the band play “Father Of Lies” below:

Check out another performance, of “Let The Pieces Fall”:

Death Angel are currently on an epic run of live dates supporting Slayer and Anthrax. The tour is set to run through October 30th, and will ravage over three dozen cities and includes a glut of headlining shows scattered throughout the trek.

Comments vocalist Mark Osegueda, “I can honestly say this is the most excited, anxious, and yet focused Death Angel has ever been about any tour in the band’s entire history. Slayer, Anthrax, and Death Angel! What an amazing bill for metal fans! We also have the extreme pleasure of doing shows supporting Anthrax on this run as well. But what will bring us the most excitement is the bond we have with all the hardcore Death Angel fans out there and we look forward to solidifying that bond with all the headlining shows we have on this run. We have new songs! We are focused, well-rehearsed, and anxious to deliver a lethal performance every night we step on that stage. Thank you once again for giving us the opportunity to do so.” 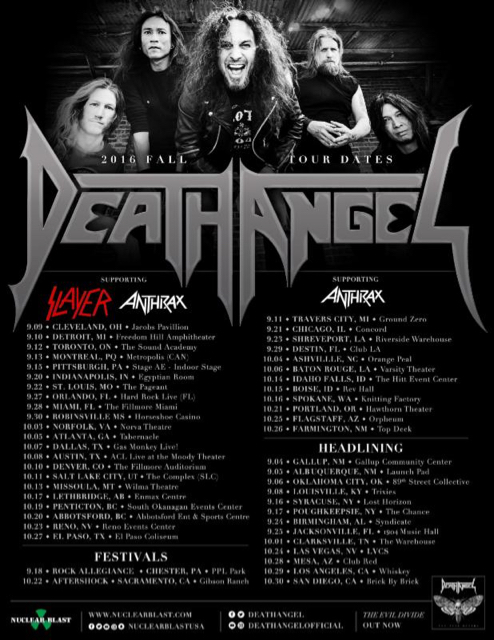