We recently had the honor to listen to Fine Line o Sacrifice, the fist track from DC COOPER’S solo album in demo version, and we wrote a brief issue about.

But… we want to know more about! Here follows a very interesting interview with the singer. Thank you, DC, for the time spent with us! And you all, readers, enjoy!

FINE LINE OF SACRIFICE! You shared this with aaaaaall those contacts that have subscribed to your newsletter. This is a very particular choice: some would have rather choose to share it with magazines and insiders only, but you didn´t…

I really wanted to share it FIRST with the subscribers of DCCOOPER.COM website. Sort of a BIG “Thank you” for being so close and constant with their support. It wasn’t meant to disappoint or leave out anyone else. I will actually be sharing the same song with the world in the next few days. But I wanted to give the subscribers an extra special thank you. (Lol, hopefully this will entice people to join the mailing list???,… Lol,…hint hint!)

I think that your fans are veeery looking forward to your solo album. You can sense this, isn´t it? Do you want to share with us any particular episode or anecdote occurred during the whole creating process?

Lol, other than it took YEARS AND YEARS???!!! And Yes,…I can sense it from the response online from the fans. I’m excited for them, and anxious at the same time that they will like what they are hearing.
I’m not certain of any one event, but I do know that over the past year (through the immense help of Dave Watson and Kenny Porter), my smile continues to get bigger and bigger as the music evolves and grows bigger than I imagined! From the inception of my writing the songs, to the final demo recordings, the material has progressed and actually taken on a life of their own.

Since the very first listening, I can sense a very introspective approach, both for key of the song and lyrics, along with a hidden aim to epic. So… Who is DC Cooper now? Where does he is, on his own life line?

who is DC?,…. Wow,… I’ll try to explain this without taking too much of everyone’s time!! I think I’m always in an ever changing state. Hopefully growing and learning everyday. I’ve been able to do so many things in my life,…be many different people,…but the one true steady has been music over many years. I myself, like millions of musicians have sacrificed so much of their lives,…dedicated themselves to their talents that they cross that,  “The Fine Line of Sacrifice” ,…over and over and over. To achieve that goal,..or dream.

I was recently told by someone close to me, that I’ve wasted my life on music,…that I never reached the ultimate goal or level of stardom that I’ve wanted. My life could of been so much more. There may be some element of truth to that,…but, I know that,…I’ve known that for a long time,…but I don’t look at it as a waste.

I look at it as a struggle that gives me many facets of emotions and satisfaction. I also think that it made me realize I need to be more accepting of the way it is,…and ENJOY what I’m doing and what I’ve done.

I am not delusional to think I’ll become the next “Bon Jovi”,…but, I do know I have a lot of music left to sing and write about. Like most musicians, our lives mirror our music, and vice versa.

I don’t know what my life would be like without music and singing, but I do know when I’m singing on stage, or in the studio, I feel alive. 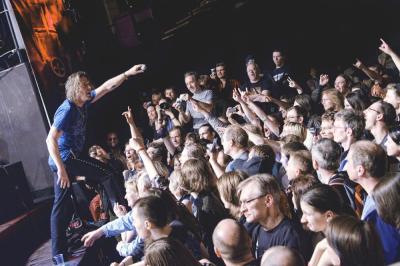 Did you write everything? Or someone else helped out with the arrangements?

Yes,…I have written all the songs on the new album. It’s been a labor of love and hate over a LONG period of time. BUT,…it is with HUGE admiration, respect and thanks,…that I can say that Dave and Kenny (guitars) helped make it become a reality. I can honestly say,  that the entire album was on the verge of never being heard. I was frustrated and disenchanted with the music business, (like many others) that I was ready to call it quits. But, sitting back in the studio, and watching the solo TEAM play, record, rehearse and fine tune the songs, that it brings a smile to my face just writing this now.

Tell us something about the musicians involved.
Dave Watson (lead and rhythm guitars), I’ve known Dave for quite a few years since I produced an EP for his earlier band “Grave Desires”. Dave has grown more and more talented with his playing, singing and his engineering skills that at times it makes me envious! He’s become an incredible friend also!

Kenny Porter, (lead and rhythm guitars), and myself have crossed paths many times over the years but, never had the opportunity to work together until now. Kenny also,  has skills that amaze me with his playing and sense of structure that lends itself perfectly for the material that was written. Every time we get together, there’s always a moment where a smile crosses my face and I feel blessed to be working with the both of them.

Currently, I actually have two drummers, Goef Wilson performed on the  demo recordings of the first 4 song that will be released over the next month. When I first saw Geof playing, I thought “damn,…I need this kid in my band!” For a 22 yo drummer, he showed such style, charisma, and talent, that I couldn’t leave the venue without his number. Geof lives out of state,  it has caused some issues of timing of rehearsals and such, so we recently brought on board a practice drummer,…

Chris Compton is currently our practice drummer and has IMMENSE potential and talent. He’s been able to help us round out the final arrangements and also has a fever for becoming better than he is right now. I love seeing that in a musician,…someone who strives to be better for the main purpose of a team.

Jim Zamerski is a very recent addition. He’s currently our keyboardist,…and what an incredible keyboard player he is! We are hoping that he’ll stay on board as they are hard to find! He’s brought a new “spark” to the process and has helped with new ideas and sounds. But, he has many other obligations and I would love to have him permanent on board!

BASS,….well,..bass player position is currently open!!! We’ve been through a few bass players, and no one has quite fit in,…so Pittsburgh bass players need to contact me!!!
I cannot wait to see the looks on their faces when we play ProgPower USA in Atlanta Georgia next September! (Or tour the world?) It will be an honor to be onstage with this team!

Guitars are pretty awesome, rhytmics and riffs are even more than scratching! There are lots of genres in this track, but the chemical and the harmony among them is something magic. Along with the vocals! I Wonder how many air, in litres capacity, your lungs may hold?

Yes,…the guitars kick ass don’t they???!!!! As for my lung capacity,…lol,…if I was speaking and not typing this interview,…you’d say,…”doesn’t he ever shut up?!” 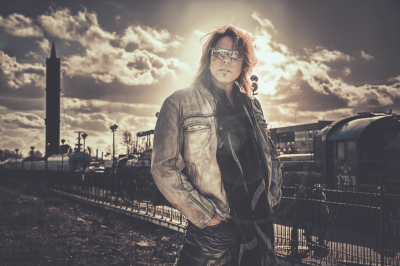 I cannot operate a comparison between your DC Cooper solo album issued in 1999 and this, as I could listen to just one track, but… you can do that for sure! Which are the main differences between these two works, from both technical and emotional points of view? Long time has passed, and the singing angel grew-up…

The first solo cd, seems to be one of my most celebrated and (still to this day) most talked about cd I’ve ever been on. I’ve been involved, whether singing leads,…backing vocals,…guest tracks,…produced on over 38 albums and the first solo cd still remains one of the most popular. SO,…it goes without saying,.. That’s one of the reasons it’s taken so long to fine tune the new cd. I want it to be no less than perfection.

There will be some similarities, but I believe you will notice a much more “mature” and emotional release. A close friend told me a while ago, after listening to some of the material,…”this is the Truest DC I’ve ever heard”.

Because it shows so many of my personal influences and a varied range of styles.

I just hope,..and even sometimes pray,…that once every one listens,..they’ll love it more than the first. It might take a few listens for some people,…but in all my hopes are positive and proud of the work and endless hours put into this.

Thank you for your time! If it was not clear, we cannot wait anymore for your work to be issued! :v

Thanks to my guys in the band,…and everyone else who has dedicated their time and talents thus far,,.and  especially the fans for their patience and never ending support! THANK YOU!!!

Al BASSO…. bhe.. le selezioni sono ancora aperte! !!! Ne abbiamo provati alcuni, ma non abbiamo ancora trovato quello giusto… quindi… Messaggio per tutti i bassisti di Pittsburgh: contattatemi!!!
I cannot wait to see the looks on their faces when we play ProgPower USA in Atlanta Georgia next September! (Or tour the world?) It will be an honor to be onstage with this team!