Ladies In Rock recently conducted an interview with MEGADETH bassist David Ellefson about METAL ALLEGIANCE, the all-star project that also features TESTAMENT lead guitarist Alex Skolnick, SONS OF APOLLO drummer Mike Portnoy and Mark Menghi. You can listen to the entire chat via the SoundCloud widget below. A few excerpts follow (transcribed by BLABBERMOUTH.NET).

David: “I think what happens on a second album, you tend to focus a bit more. I think on the first album, we had a nice, really wide variety of ideas and with this album, we were able to maybe be a little bit more focused on what we intended to do. We also narrowed down the guests a little bit on this album because we didn’t want to repeat having too many people just repeat on the second album. We did with a couple of people, like Mark Osegueda [DEATH ANGEL] on vocals, but for the most part, the core four of me, Skolnick, Menghi and Portnoy, we do the writing, we do the recording and we essentially put the album and the songs together, then start reaching out to guests to appear on the album for us. So, I think we have a nice round of new guests, guys like [Bobby] ‘Blitz’ [Ellsworth] from OVERKILL, John Bush [ARMORED SAINT], Floor [Jansen] from NIGHTWISH, Mark [Tornillo] from ACCEPT, even Johan [Hegg] from AMON AMARTH, so I think we got a really cool featured guest selection on this album.”

On whether METAL ALLEGIANCE has already found their sound or it will change over time:

David: “I think the beauty of METAL ALLEGIANCE is that it will always continue to evolve. On some level, it’s a hard rock and metal album obviously, but, metal is a very wide category and as much we’re of a similar age group and Alex and I both play in definitive thrash bands with TESTAMENT and MEGADETH, there is certainly a whole wide variety to what metal music is. The metal from the ’70s, the ’80s, into the ’90s and now the modern-day metal, black metal, doom metal, nu metal, thrash metal, power metal, so it’s nice that we can evolve it. I think on this, bringing Max Cavalera in on ‘Voodoo Of The Godsend’ — Max, to a large degree, SEPULTURA was kind of the, they combined thrash and especially nu metal once Max started doing SOULFLY, so we had a little bit of a flavor of that in there. I also like that this album comprises largely of guests from outside the U.S.A. with Floor, Johan, Max, who lives by me in Phoenix, he really represents Brazil. I think this album, more than anything, plants a lot of international flags in it.”

On the writing process for “Power Drunk Majesty”:

David: “The thing we changed a little bit on this record is the first six songs Menghi, Sknonick and Portnoy wrote back in New Year’s of 2016/17, then a few months later, me, Portnoy and Skolnick got together and wrote the second batch of songs and we intentionally broke it up because as much as me and Mark are bass players, we both write very different and we knew that it would help create kind of a real showcase of what the four of us do together. We discovered on the first album that when Menghi came in, he had sort of a PANTERA and [BLACK] SABBATH vibe to his compositions. I obviously bring thrash stuff, but I also like to do things beyond just thrash. I get to already do that in one of the greatest heavy metal bands in the world, which is MEGADETH. For me, METAL ALLEGIANCE is about doing some things outside of just playing the type of thrash and metal that I do with MEGADETH. For me, METAL ALLEGIANCE is about not repeating what I do in MEGADETH. I already get to do that there, so for me, I think writing songs like ‘Voodoo Of The Godsend’, the bass parts and the music for ‘Impulse Control’, those things. Also, a lot of lyric stuff. Things like ‘Power Drunk Majesty’ and ‘The Accuser’, were songs that I initiated the lyrics to. I get to have a really nice lyrical contribution. Usually, I’ll start a lyric and I’ll send it right over to Menghi and he and I will start collaborating on the lyric ideas. Regardless of who plays on a song, me or Mark, it’s kind of like we both touch each other’s songs. I wrote lyrics to a lot of his songs and he ended up having contributions into the music for some of the songs I wrote. It’s really a cool collaboration that Menghi and I get to have, both being the bass players in the band.”

On whether METAL ALLEGIANCE is an all-star band or supergroup:

David: “You know, we don’t even think of it as an all-star band or a supergroup. I think probably people put that label on us because there’s a bunch of famous people in the band. The truth of it is, when I’m in the room with the guys, these are my friends, these are my buddies that we all grew up together in the business. Our bands all got famous and grew up together, we toured together, we’d see each other at festivals, we’re often on the same tours together, so for me, it’s like walking backstage and seeing my buddies. The chance that we get to musically collaborate is no different than when I was a kid in Minnesota and I would call my buddies and try to write songs and collaborate and do something with them. It’s just that in Minnesota, we weren’t famous. [Laughs]” 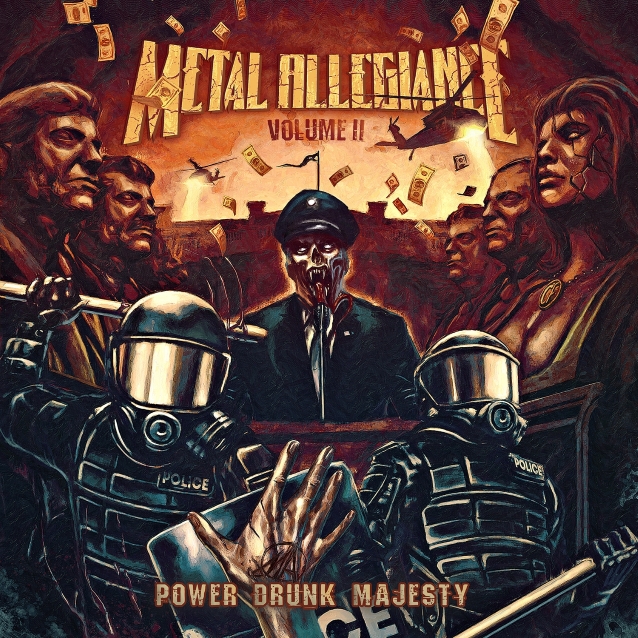