On August 2, former SLAYER and current PHILM drummer Dave Lombardo debuted his collection of rhythm­on-canvas art for the first time on the East Coast with an in-person appearance at Art On A Gallery.

A video interview with Lombardo conducted at the event by the “Wendigo Aftershow” can be seen below. A couple of excerpts follow (transcribed by BLABBERMOUTH.NET).

On whether he always knew that he was going to be a professional drummer:

Lombardo: “I didn’t know. I mean, I was… I had the passion in me, and I had the drive. Did I know I was gonna succeed the way I did? No. I never thought I was going to reach the status that I reached today. So it was quite a surprise because my parents, obviously, were telling me at a young age, ‘Look, Dave, you need to focus on a career instead of music. That’s not gonna put food on the table.’ And so, with that advice, I think I was just even more determined to succeed. I was basically told, ‘You’d better find another career and another job.'”

On what else he could have done for a career had he not become a successful drummer:

Lombardo: “Right out of high school… ‘Cause I graduated high school… and… not majored, but my vocational training was technical drafting… You know, design — technical design, technical drafting. And I, immediately, right after high school, I got a job at a diesel… It was called diesel energy systems company, and I would design enclosures for generator sets for hospitals or the department of water and power and various other companies. So I would create these enclosures for these generator sets. So I might have taken a career in engineering at that time.”

On whether living in a Cuban household influenced his drumming style:

Lombardo: “Absolutely. Cuban music has a lot of percussion in it, and having that in your culture, and it being part of, you know… very big part of the culture, you can’t deny it. You can’t resist enjoying music that has drums in it. Although I like all kinds of music — all other styles of music that don’t even have drums — but, for the most part, music that has drums, I really enjoy.”

On whether he ever had a moment when he was a kid when he realized he was a lot better on the drums than everybody else:

Lombardo: “In fourth grade, I realized that I was a lot faster than other drummers — I was faster at drum rolls. I was faster when I was in a marching band in fourth grade. The cadences… I would learn them and play them at the tempo that the teacher would ask me, but then, after getting comfortable with it, I would speed up and play it as fast as… probably as humanly possible. So, yeah, I kind of realized that at an early age.”

As the founding drummer of SLAYER and the current drummer in PHILM and FANTÔMAS , Dave Lombardo is responsible for some of music’s most acclaimed rhythms. With his art debut “Rhythm Mysterium”, Lombardo crafted the visuals in the collections through drum performance. Working with art team SceneFour, Lombardo utilized drumsticks that light much like a painter uses brushes with oil. An extensive process from start to finish, Lombardo‘s rhythms are captured and brought to canvas in a highly vivid and abstract way.

“Rhythm on canvas” is a new medium in art — a movement led by the world’s greatest drummers, started at SceneFour, a visual art team based in downtown Los Angeles. Through their signature collaborative art approach, they work with notable visionaries outside of the fine art world to collectively create original art projects. At the conclusion of the creation process with featured collaborative guest, an original art collection is born and released worldwide.

Art On A Gallery specializes in works by independent, alternative artists, often with a connection to the music scene and is proud to be the first East Coast gallery to display Dave Lombardo‘s collection.

The collection will be on display through September 6. 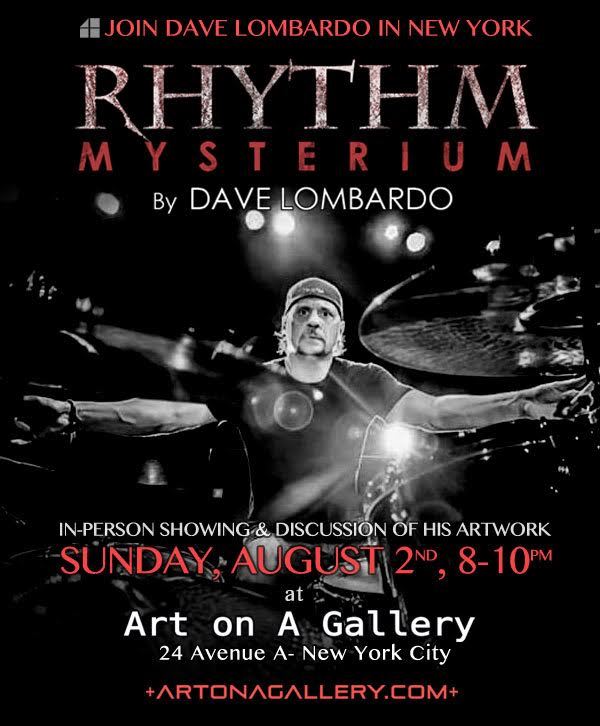 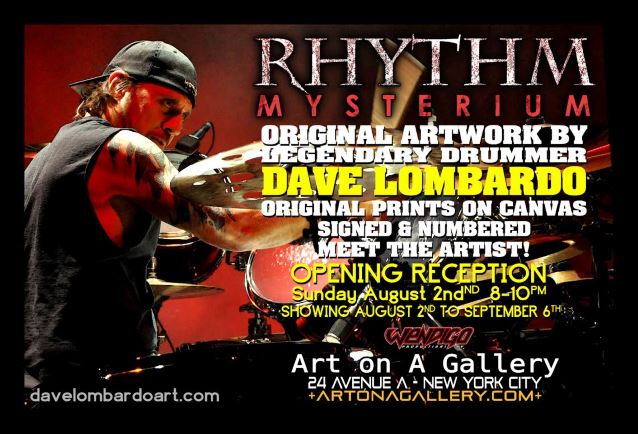