Craig Goldy has once again defended DIO DISCIPLES‘ decision to go on tour with a hologram of Ronnie James Dio, saying that it is nothing but “a grand gesture” that does not disrespect the memory of the legendary heavy metal vocalist.

Goldy joined DIO during the “Sacred Heart” tour in 1986 after original guitarist Vivian Campbell was fired from the band following a contentious business disagreement with the singer and Ronnie‘s management.

For the past several years, Goldy has played sporadic shows with DIO DISCIPLES, which is made up of former members of DIO, along with a rotating lineup of singers, including former JUDAS PRIEST frontman Tim “Ripper” Owens.

Billed as a “celebration of the music and legacy of the greatest singer in the world, Ronnie James Dio,” DIO DISCIPLES has just kicked off a world tour during which it is fronted by Ronnie‘s hologram for select songs.

Based on video footage of the first couple of shows, Dio fans had mixed reactions to the apparition of their favorite singer, with some loving it and others thinking the performance didn’t live up to the real thing or was just plain creepy.

After Don de Leaumont of The Great Southern Brainfart made a Facebook post on December 10 calling for Craig to “put an end to this shitshow,” the guitarist took to the social media network to respond to the criticism. He wrote: “You’ve missed the whole point. It’s your way that disrespects Ronnie, and you think it’s what I’m doing that disrespects Ronnie.”

Disputing the assertion that he was doing the “Dio Returns” tour as a way of “cashing in,” Goldy said: I am always out of pocket on these things, and have plenty of other projects going on with big names who are alive… This is not a gig. This is not how I make money. The other projects that I am involved in have very big-name musicians from OZZY [OSBOURNE], WHITESNAKE, DIO, AC/DC, Michael Schenker, and a surprise singer that is going to blow people away, and others with members from BLACK SABBATH, LYNCH MOB, PINK FLOYD. Writing and touring with Joe Lynn Turner, touring with guys who also played with RAINBOW, BLACK SABBATH, ALICE COOPER, DEEP PURPLE, AC/DC, Jimmy Page, being a counselor for Rock ‘N’ Roll Fantasy Camp, and so much more. You speak out of ignorance of the truth.”

Goldy said that he had a chance to speak to some of Dio‘s fans after DIO DISCIPLES‘ December 9 concert at Progresja in Warsaw, Poland. “If you could’ve been there and have seen the happy faces and tears in their eyes for the shared love for Ronnie and getting to go out onto the floor afterwards like Ronnie would do…. no paid meet-and-greets, just him with his true friends and family — that’s what it felt like,” he wrote. “The hologram was pointless at that time, the DIO DISCIPLES were pointless at that time — it was just me and my love for Ronnie and their love for Ronnie, and what was in my heart and what was in their hearts, and it was beautiful. That makes all this crap worthwhile, ’cause I get to at the very least keep his way alive in that manner, and that his way with the fans did not die with him! The hologram and the band became pointless, because when I came out there to face them — good response or bad — it was no longer about anything other than what was in our hearts, and that transcended past any bullshit like this.”

“When I got a chance to go out onto the floor and talk with the fans, they were sooooo happy and emotional, kind, appreciative with only love in their hearts because they gave me a chance to face them, talk to them, and they could see and hear for themselves the love we shared together for Ronnie,” he continued. “One guy read my posts and came just to see if once he met me if I was full of shit, and he too was full of apprehension and disagreement about the hologram, but once he saw the whole concert and the heart of those on stage, the pumping PA equipment and was able to look me in the eye and say, ‘I came here to see if you were full of shit,’ and instead ended up hugging me because he was so overwhelmed by the true spirit behind and within this thing. This is something that just simply cannot be translated over a computer screen on YouTube.”

According to Craig, he recently had a “great conversation” with “one of Ronnie‘s most treasured friends” who was also not a fan of the hologram idea. “We had a mutual bond — our love for Ronnie — and our disagreements did not leave a single scratch on our friendship,” the guitarist said. “That is what hurts the most, because every fan to Ronnie were his friends and family, and if I can have a civilized conversation with the man Ronnie had the utmost respect and love for, who also dislikes the idea of the hologram, to me, that is a conversation that does not disrespect Ronnie. Ronnie loved us both, and we both had a special connection to him, but we were on opposite sides of this subject matter, and we simply talked it through without any words like ‘whore’ thrown around.”

Craig added that while he is aware some of Dio‘s fans have an issue with the hologram tour, “many people understand the simplicity of this. It’s not anything other than a grand gesture with the lights from the same gifted man who was the lighting director on the ‘Sacred Heart’ and ‘Dream Evil’ tours, the images on the two screens on each side of the stage, and only a handful of songs done with the hologram.”

“Dio Returns: The World Tour” will also make stops in Spain, Romania, United Kingdom, Netherlands and Belgium before the end of 2017.

Dates initially announced for Finland, Sweden and Norway are being rescheduled for a larger run through Scandinavia in 2018. The “Dio Returns” tour will also make stops throughout Argentina, Australia, Brazil, Canada, Chile, Colombia, Ecuador, France, Germany, Japan, Mexico, New Zealand, United States, Venezuela and other countries, with more dates to be announced.

The hologram of Ronnie James Dio made its debut at last year’s Wacken Open Air festival in Germany. The surprise appearance of the heavy metal icon during DIO DISCIPLES‘ set closed out the massive metal event which was attended by more than 75,000 fans. 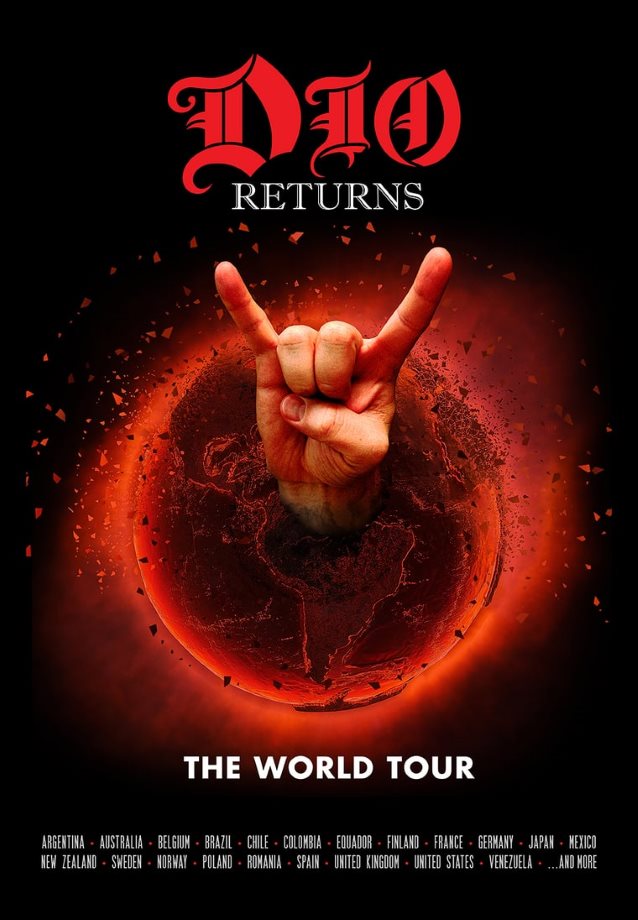