CRADLE OF FILTH keyboardist and vocalist Lindsay Schoolcraft, an accomplished singer, songwriter, harpist, and pianist in her own right, will release her debut solo album on October 7. “Martyr”, co-written by former EVANESCENCE drummer Rocky Gray, offers eleven tracks of entrancing gothic rock, influenced by Schoolcraft‘s background in classical music. Fans of EVANESCENCE, NIGHTWISH, and the like will appreciate “Martyr”‘s lush, piano-driven arrangements, while CRADLE OF FILTH enthusiasts will enjoy hearing this darkly romantic side of Schoolcraft‘s music.

Lindsay commented: “At last I can finally share with the world what I’ve been so vaguely teasing online for years.

“I can’t thank my fans enough for being so patient about this release.

“Working with Rocky Gray has been a dream come true for me and the love I have for his work and my lyrical stories really shines through on this album. I hope everyone enjoys it as much as I did creating and recording it.”

Based in Oshawa, Ontario, Canada, Schoolcraft was discovered and recruited by British extreme heavy metal band CRADLE OF FILTH in 2013 and promoted to full-time membership in 2014. Since then, she has embarked on many world tours and appears on albums “Hammer Of The Witches” (2015) and “Cryptoriana: The Seductiveness Of Decay” (2017), both released under Nuclear Blast Records.

In addition, Lindsay is a co-founder in the classical meets black metal ensemble ANTIQVA alongside co-creator and guttural vocalist Xenoyr (NE OBLIVISCARIS). She also has a character, Skvllcraft, modeled after her stage persona in the black metal comic “Belzebubs”; Lindsay contributed her vocals as said character on their album “Pantheon Of The Nightside Gods” (2019, Century Media Records). 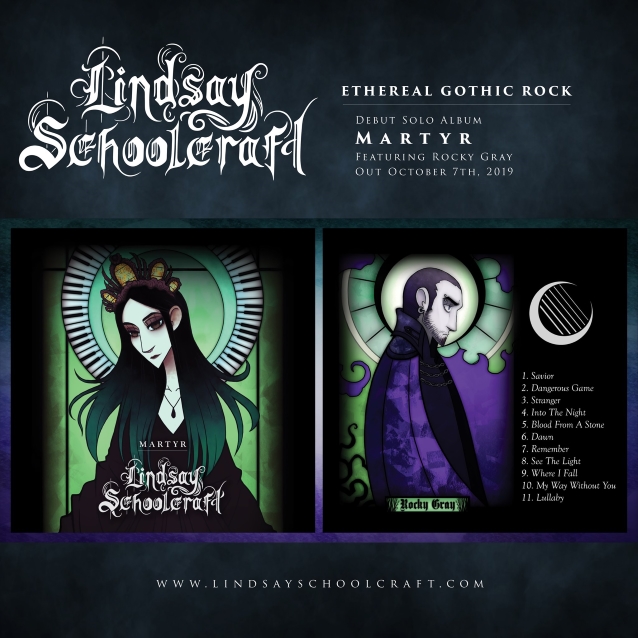