British extreme metallers CRADLE OF FILTH will release their eleventh studio album, “Hammer Of The Witches”, in July via Nuclear Blast. The cover artwork for the CD can be seen below.

“Hammer Of The Witches” will be made available on jewel case CD, limited-edition digipak, mail-order edition and 2LP vinyl.

“Hammer Of The Witches” track listing:

01. Walpurgis Eve
02. Yours Immortally…
03. Enshrined In Crematoria
04. Deflowering The Maidenhead, Displeasuring The Goddess
05. Blackest Magick In Practice
06. The Monstrous Sabbat (Summoning The Coven)
07. Hammer Of The Witches
08. Right Wing Of The Garden Triptych
09. The Vampyre At My Side
10. Onward Christian Soldiers
11. Blooding The Hounds Of Hell

CRADLE OF FILTH vocalist Dani Filth states: “The artwork for ‘Hammer Of The Witches’ was created by Latvian artist Arthur Berzinsh and is a lavish walk-through of the lyricism, drawing on rich renaissance themes and displaying them in beautiful-yet-unsettling scenarios. Half of the detailed pieces are totally original for the release, others are Berzinsh classics cunningly tailored to the themes of the album, which are themes rife with heady witchcraft, be it persecution, retribution or unfettered spiritual liberation. The female form is rampant throughout the artwork, unashamedly displayed in its classical rendition of beauty… and horror.”

Arthur Berzinsh is best known for his defiant neo-symbolism raster graphics and oil paintings, postmodern interpretations of classic myths and refined hooliganism in the playground of contemporary art. He has been proclaimed as a “sacred monster of Latvian postmodernism.” And rightly so, his visually expressive and mannerly works tend to trigger emotions which can make thoughts fidget and wriggle, unable to find a comfortable position among the impressions gathered. His creative work is characterized by a varied range of voluptuous erotica, intensified imagery, dream-like scenes and decorativeness weighed down by visual metaphors and contrasts teetering on the edge of symbolism.

Arthur Berzinsh explains his artwork and concepts: “In terms of mood, I was looking for the inspiration of this set in the spirit of Faustian romanticism, the ambivalent art of renaissance that reanimated motives of pagan mythology after the Middle Ages, and, of course, the darkly beautiful and charming spirit of Goetia traditions that is filled with the atmosphere of hermetical rituals.

“My personal conceptual leitmotif that inspires me is a conflict between the free-thinking and totalitarianism, where the raw power always gains the upper hand over individualism.

“The act of art is a theurgical act that creates existence in the Platonic reality — reality of ideas. So, at least in this Platonic dimension let’s give the suppressed ones a chance to get their revenge.

“For me, the Goat of Mendes on the cover symbolizes the scapegoat who’s tired of his humiliating role and wants a payback. This character is an archetypical symbol of libido and other primordial forces and instinctive aspects of a human being. And these forces always have been a menace for those who want to reign over the others, like it’s schematically represented in George Orwell‘s ‘1984’.”

CRADLE OF FILTH have been ensconced in creative purgatory for the last few weeks in Britain’s darkest rural Suffolk, busy finishing the recording of their album at the reputedly haunted Grindstone Studios. It has been three years since the release of their previous album — the longest gap in the band’s history. And the wait is almost over.

“Hammer Of The Witches” will mark the first release with CRADLE OF FILTH‘s new lineup, which includes new guitarists Ashok (of Czech groups ROOT and INNER FEAR) and Richard Shaw (of English acts EMPEROR CHUNG and NG26).

CRADLE OF FILTH is: 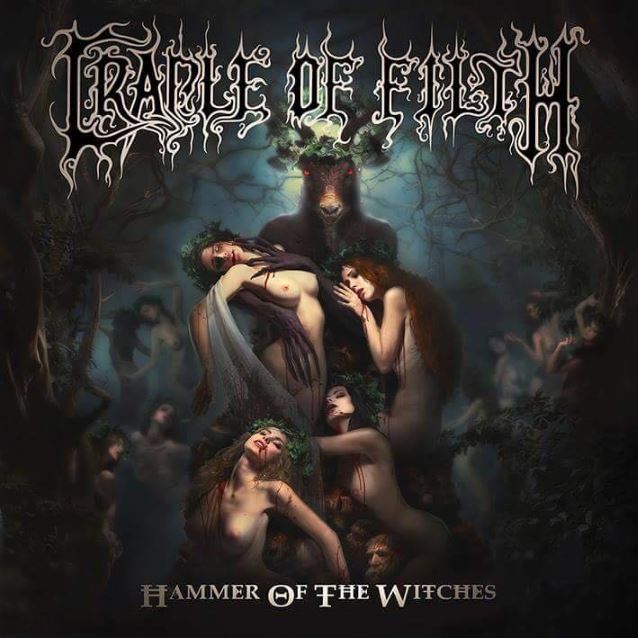