An eleven-minute video recap of CORONER‘s recent tour of South America and Mexico can be seen below.

CORONER has reportedly commenced working on material for a potential follow-up to the band’s acclaimed last studio release, 1993’s “Grin”.

During an interview with AndrewHaug.com, CORONER guitarist Tommy Vetterli was asked if the band has any interest in putting out new music five years after the group announced its return to the metal scene. “Sure,” he replied. “That’s actually one of the reasons why [original CORONER drummer] Marky [Edelmann] wanted to leave the band.”

He added: “I can’t say when [a new studio album might arrive]. It’s just what we want. But everybody’s very busy, you know — me producing bands in the studio all the time. And after ‘Grin’, it’s not easy to… If we do something, it has to be very good.

“We’re gonna start to write songs and then see what happens. I don’t know yet [how it will turn out].”

CORONER last year announced the addition of drummer Diego Rapacchietti to the group’s ranks. The band said in a statement: “Diego is an accomplished and innovative drummer. He has played in bands PAGANINI, VENTURIA, 69 CHAMBERS, and many more. Diego also has extensive experience as a studio drummer for various projects.”

Rapacchietti made his live debut with CORONER on May 29, 2014 at Salzhaus in Winterthur, Switzerland.

Edelmann (a.k.a. Marquis Marky) left CORONER in February 2014, explaining in a statement that “it was clear from the start that I didn’t want to record another album. I love the sound of CORONER, but for me, it’s the moment to explore new sounds without the weight of the past on my shoulders.”

Originally part of the road crew for fellow countrymen CELTIC FROST, CORONER went on to become one of the most progressive extreme metal acts of the Eighties.

The connection between the Zurich band and CELTIC FROST was so strong, in fact, that CELTIC FROST frontman Tom G. Warrior offered to handle vocals for the emerging band’s demo. Warrior and CORONER entered Switzerland’s Magnetix studio on October 10, 1985, and nine days later they walked out with the impressive four-song 1986 release, “Death Cult”. 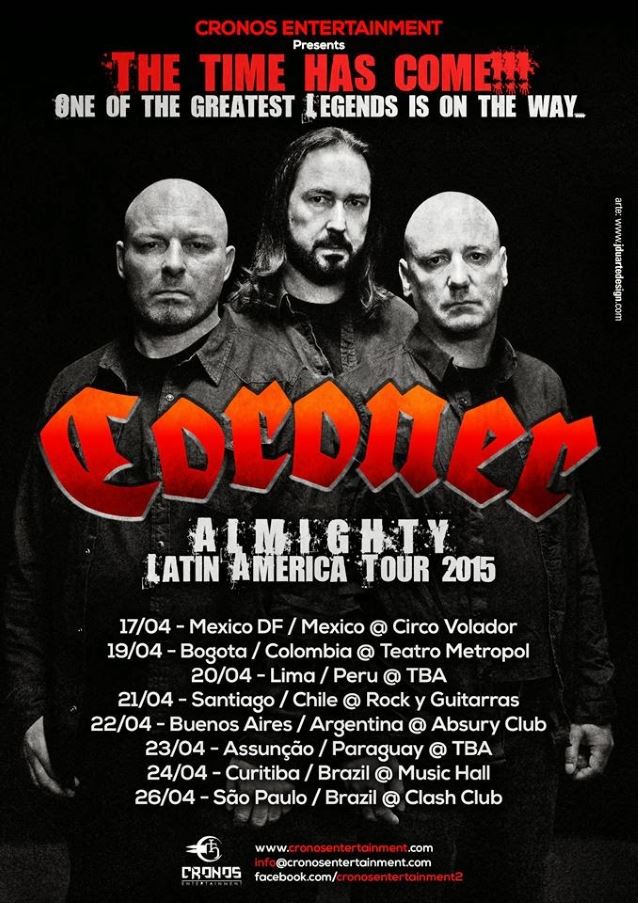