SLIPKNOT frontman Corey Taylor has opened up for the first time about the the band’s new members, saying that the group’s live performances have gotten “consistently better” since SLIPKNOT‘s current lineup made its concert debut last October.

Up until now, the members of SLIPKNOT had declined to name the musicians who are playing drums and bass on SLIPKNOT‘s current tour, despite the fact that their identities were revealed as drummer Jay Weinberg and bassist Alessandro “Vman” Venturella by a disgruntled former drumtech for SLIPKNOT who posted a picture of a backstage call sheet on Instagram.

During an appearance on the latest installment of the “Talk Is Jericho” podcast, Taylor talked in depth about SLIPKNOT‘s latest additions, saying: “[Touring with the new members has] been killer. It’s been really, really good. It’s been cool to watch them come out of their shells too. Because, at first, they weren’t sure how far to go. I mean, that’s the respect level… They’re so respectful and they dig what we’re doing so much that they don’t wanna cross any boundaries. But they’re having a really good time. So we were, like, ‘Let’s step it up. It’s time. It’s time. Start to get into it.’ And Alex, our bass player, he’s so into it that he’s started to kind of come up to the front, really started to own it. Jay‘s just started to take it up. And, yeah, man, it’s been really good. So every show has just gotten consistently better and better and better. Last night, we hadn’t played in seven weeks, and we went on stage and, I mean, we could stop on a dime. It was incredible! And I’m talking about three songs that we hadn’t played live — we had just rehearsed [them] a couple of times — and, dude, it was on!”

Weinberg, the son of Bruce Springsteen drummer Max Weinberg, joined SLIPKNOT as the replacement for founding drummer Joey Jordison, who was fired from the band in 2013. Taylor praised his former bandmate while describing Jay‘s contributions to SLIPKNOT. He said: “One of the great things about Joe was his capacity for the unexpected. ‘Cause he could… Sometimes he could vibe on where we were, and he could either ramp it up or bring it down. So you really learned to play together. You didn’t learn to play to that meter. You learned to play together. Jay is so consistent, and you don’t realize how much you miss that until you get it. But he can still do all the crazy stuff — the reverse paradiddles and all that weird drum stuff. So it’s cool. There are benefits to both.”

He continued: “I have been lucky enough to jam with so many different drummers over the years that you really start to see that every drummer is different. They may be playing some of the same parts, but it’s so different, because it’s their thing.”

According to Taylor, SLIPKNOT didn’t hold any drummer auditions before deciding to work with Weinberg shortly prior to the recording sessions for the band’s latest album, 2014’s “.5: The Gray Chapter”.

“It’s kind of cool, the way it all came together,” Corey said. “It was almost kesmit, to be honest. ‘Cause we didn’t try out a lot of people. I mean, honestly, Jay was the only dude we tried out; he worked so well. He’s been a fan since he was eight years old.”

He continued: “We were sitting down trying to think of what to do next. And I can’t remember if it was Clown [SLIPKNOT percussionist Shawn Crahan] or [SLIPKNOT manager Cory] Brennan. They sat us down [and were], like, ‘You’ve gotta see this video.’ ‘Cause we all knew Jay, ’cause he had been coming… We would see him backstage with his dad. [We would say], ‘How are you doing? How’s everything going? Oh, you’re playing drums? Cool. Keep it up.’ And Joey was a huge influence for him. So, all of sudden, we start seeing these videos of Jay playing, and we were, like, ‘Whoah!’ So, what we did was we booked a studio — and I won’t go too much into the background of it — we booked a studio, we didn’t even tell him what it was about. We just told him… We weren’t even the ones telling him. We just told him, ‘Be at this place with a set, at this time, for an audition.’ And then we all walked in. And [he was, like], ‘Huh. Huh. Ehhhhhh…’ And we started going through tunes, and he knew every tune. The ones he didn’t, he knew half of it. It was insane. And that’s how that started.”

SLIPKNOT guitarists Jim Root and Mick Thomson reportedly handled most of the bass duties on “.5: The Gray Chapter”, with some help from Venturella and former touring bassist Donnie Steele. Taylor spoke about how SLIPKNOT eventually decided to hire Venturella to finish out the record and join the band on the road. He said: “[The way] Vman [came into SLIPKNOT] was a little different [from the way Weinberg did], because we had a couple of people that we were looking at and that we had actually worked with, and it just wasn’t vibing. Nothing against them technically — it just wasn’t vibing. And I think Jim was actually the one who said, ‘For now, let’s bring Vman in. He can handle it.’ ‘Cause the dude is a ripper. A lot of people don’t know that. We met him through MASTODON, so we’ve known him a long time, and Jim knew just how good he was. So he came in, and he just started handling it. And he’s so easy to hang out with. He’s such a great dude. And it just got better and better and better and better and better. And the question got brought up towards the end of the album. It was, like, ‘What are we gonna do live?’ And we were, like, ‘What do you mean? He’s coming with us.’ It was a slower burn for him, because we had tried a couple of other people. But it worked so well that it was just, like, ‘Okay, this is it.’ And then it was trial by fire, ’cause now you’re jumping out of the airplane. The first gig was Knotfest in front of 25,000 people. That was their first gig. But it came off, man, and it’s just gotten better. It never gets easier, but it’s gotten better.”

SLIPKNOT‘s original bassist Paul Gray passed away in May 2010 from an accidental overdose of drugs.

SLIPKNOT announced its split with Jordison in December 2013 but did not disclose the reasons for his exit. The drummer subsequently issued a statement saying that he did not quit the group.

Weinberg was previously in the punk band AGAINST ME! and left under less-than-friendly circumstances. AGAINST ME! singer Laura Jane Grace tweeted last fall, “Dear SLIPKNOT, good luck with that. #shitbag.” 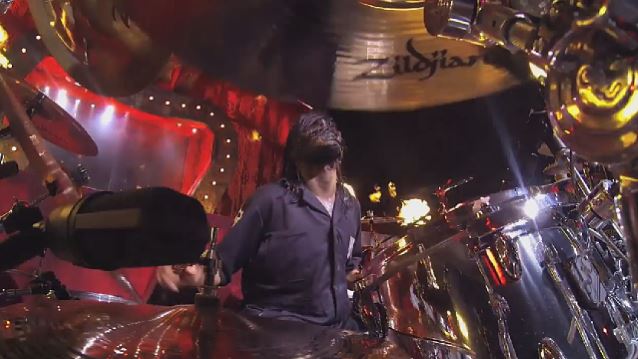 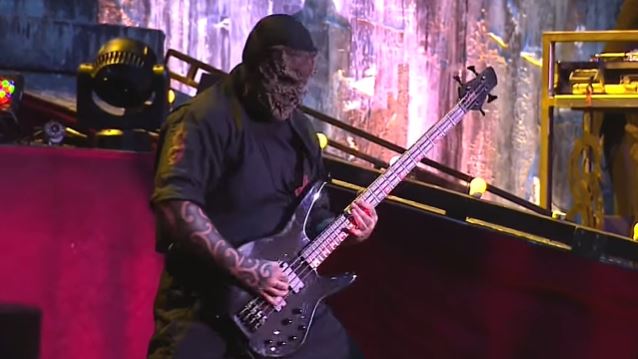 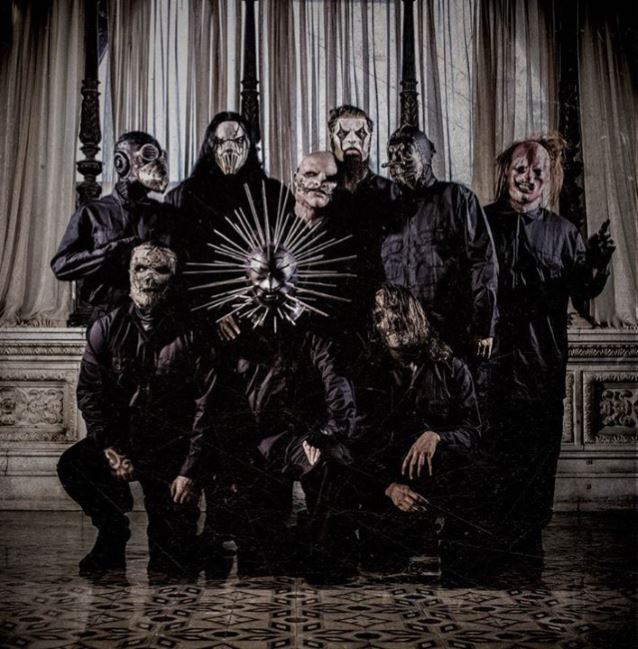