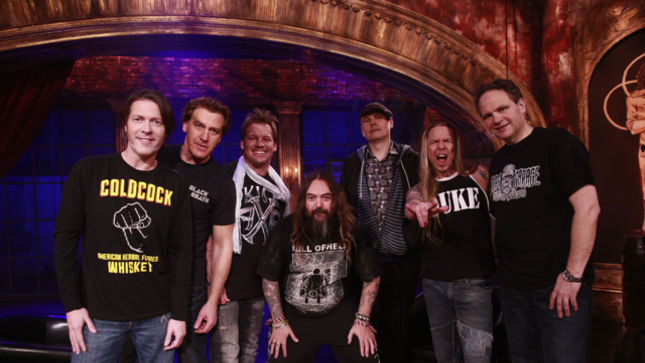 As Season 14 of That Metal Show continues to roll on with all new episodes, VH1 Classic’s centerpiece in original programming welcomes Chris Jericho of Fozzy, Max Cavalera of Soulfly, and Billy Corgan of Smashing Pumpkins this week. The guests sit down together with hosts Eddie Trunk, Don Jamieson, and Jim Florentine in a roundtable type setting; something the show did earlier this season generating some hilarious discussions and opinions from three different genres and points of view.

The episode features the debut of Rich “The Duke” Ward from Fozzy as the guest musician. Rich demonstrates his guitar playing prowess and even crowd surfs at one point on top of an elated audience. 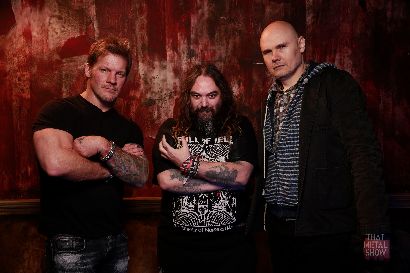 One of the episode highlights comes in the “Stump The Trunk” segment this week. Eddie proves his dominance yet again, but shenanigans ensue thanks to TMS alum Chris Jericho creating one of the funniest moments in the show’s history. “Put It On The Table” offers deeper insight into Chris, Max, and Billy when they each share the weirdest rumours they’ve heard about themselves. The “Throwdown” pits the two biggest MTV-era Scorpions albums against each other, Blackout against Love At First Sting and the hosts offer up their favorite new releases in the “Pick Of The Week”. Another episode highlight comes in the “TMS Top 5” as the hosts pick the Top 5 Better Live Songs (live version that is better than the recorded version) and is the probably the most agreeable they have ever been during this segment.

Fans can watch all previous episodes and other exclusive bonus clips at ThatMetalShow.VH1.com and on the new VH1 app as well as the new “That After Show” segment.

Season 14 will mark the return of some notable faces in hard rock/heavy metal and contain a large group of first timers as well. Some Season 14 guests will include That Metal Show alumni Kerry King of Slayer, Zakk Wylde, Kirk Hammett, Michael Schenker, Ace Frehley, and Frankie Banali of Quiet Riot. This season marks first-time appearances for Lzzy Hale of Halestorm, Mark Farner of Grand Funk Railroad, and Andy Biersack of Black Veil Brides.

Known for having the best musicians in music perform each week on That Metal Show, Season 14 continues the trend. TMS alums who will be making their TMS musical debuts will be Mike Orlando of Adrenaline Mob, and TMS favorite, the berserker, Zakk Wylde of Black Label Society. TMS first timers will be Damon Johnson of Thin Lizzy/Black Star Riders, and Nita Strauss of Alice Cooper/The Iron Maidens. Season 14 of That Metal Show consists of 12 all-new episodes and is shot at Metropolis Studios in New York City on Tuesday nights for broadcast that Saturday. Audience tickets for upcoming tapings are now available via Gotham Casting at this location.