According to The Star Online, British extreme metallers CARCASS have upset some of their Malaysian fans by posting picture of the Malaysian flag upside down after the band failed to get visas for a show in the country.

“Sorry Malaysia, no show for you guys in May,” the band wrote on its Facebook page. “Seems like your government officials still haven’t updated their calendars to the 21st century — we’ve had our visas declined on the basis of our ‘lyrical content.’ Laughable and embarrassing.

“Give us a call when you get yourselves a sensible secular state. PS if you’re reading this you’re too late, we already ‘corrupted’ your youth and played Kuching last year!”

An inverted flag is usually used in distress situations or sometimes as a form of protest.

CARCASS‘s Facebook post was unsurprisingly met with a strong reaction from the band’s fans in Malaysia, with one fan writing: “That was uncalled for. So disappointed with your status.”

Another fan said other extreme metal bands — including LAMB OF GOD and KREATOR — were not allowed to play in Malaysia in the past, but they were not disrespectful.

“It’s not right to post a picture of a flag upside down. It is disrespectful,” the fan said.

A third fan added: “Your tone is nothing but disrespectful in general…I doubt this is the way to express your anger towards the situation.”

Back in September 2013, The Department Of Islamic Development Of Malaysia (Jakim) raised objection to a planned LAMB OF GOD concert in the country, claiming that the band’s music was a mix of metal songs with the reading of verses from the Quran. Jakim‘s director-general, Datuk Othman Mustapha, said the objection was in accordance with the decision of the Fatwa (Edicts) Committee that the practices and acts of black metal groups were misguided and contrary to the true teachings of Islam. Othman hoped that the authorities would not approve the performance by taking into consideration the sensitivities of Muslims and to ensure that it did not open up crises related to faith and morality. 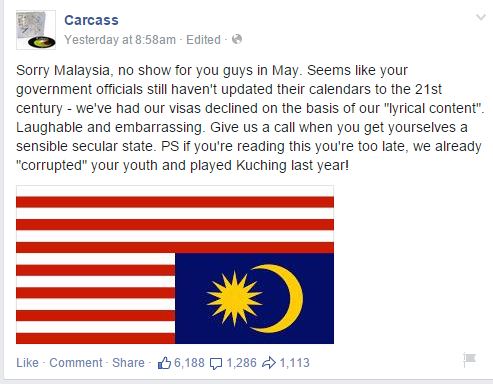