Josh Todd and Keith Nelson of BUCKCHERRY will be counselors at the Rock ‘N’ Roll Fantasy Camp in February 2017.

Register for Rock ‘N’ Roll Fantasy Camp‘s February 16-19, 2017 event featuring Jerry Cantrell and Mike Inez of ALICE IN CHAINS, and Robert and Dean DeLeo of STONE TEMPLE PILOTS, and you can spend four days in a band with Josh or Keith, where they will jam with you, mentor you and prepare you for the performances with the Camp‘s incredible headliners, as well as your two live shows, with the finale taking place at the iconic Whisky A Go Go in Hollywood, California. They will be participating in question-and-answer sessions, teaching master classes and giving you a behind-the -scenes glimpse into what it’s really like to be in band whose success has spanned across decades and sound has stood the test of time.

Don’t miss out on this once-in-a-lifetime opportunity to jam with all of the Rock ‘N’ Roll Fantasy Camp‘s amazing counselors and headliners participating in this camp.

Rock ‘N’ Roll Fantasy Camp is a non-competitive atmosphere designed for all levels of musicians and music enthusiasts. Participants are placed in bands with like-minded people and skill level to make for an off-the-charts experience.

Some of the campers play well and even gave up careers as musicians to become CEOs and lawyers. Some campers can’t play at all. What they all have in common is passion for rock music. At Rock ‘N’ Roll Fantasy Camp, they all get to pursue their passion — and meet, and play with the artists who became the soundtrack of their lives.

David Fishof is the founder and creator of the famed Rock ‘N’ Roll Fantasy Camp where rock dreams become reality. The idea came to him after years of producing rock tours throughout the word. He’s been honored to work with veteran rockers Roger Daltrey, Joe Walsh, Ringo Starr, Todd Rundgren, Gene Simmons, Dr. John, Randy Bachman, and so many more. He feels fortunate to have seen their talent first hand. David‘s desire to share this experience with you, gave him the inspiration to produce the one-of-a-kind Rock ‘N’ Roll Fantasy Camp.

The four-day camp is on sale now at www.rockcamp.com. 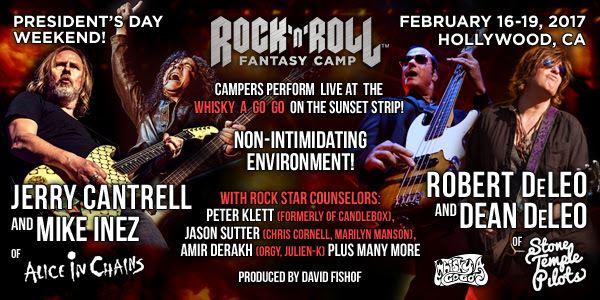