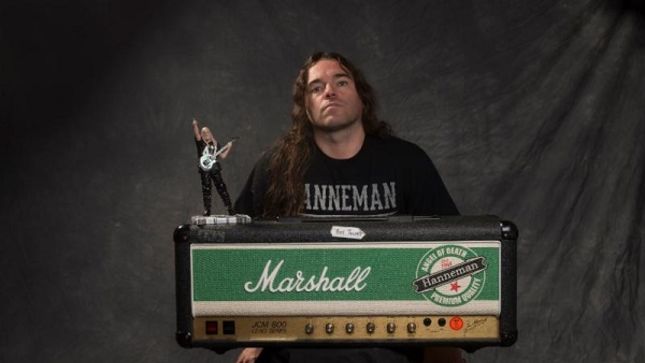 Broken Hope guitarist and Jeff Hanneman loyalist Jeremy Wagner recently shared the news regarding the reactivation of numerous famous guitars and amps owned by Slayer’s late guitar-god, now acquired by him. To further share this honor with Slayer fans across the world, Wagner has released an exclusive and in-depth look into some of the Hanneman guitars and gear in a special video directed by Tommy Jones (Slayer, Testament). In this feature, Wagner takes you inside his home studio (aka: Broken Hope HQ), and invites viewers on an audio-historical journey of Hanneman’s most famous instruments, and elaborates on his personal mission to carry on Jeff Hanneman’s legacy through the use and preservation of the Hanneman guitar estate.

As revealed in the January 2016 issue of Guitar World, guitarist and songwriter Jeremy Wagner is currently composing music for a new Broken Hope record, their second since reuniting a few years back, and he’s doing it using only guitars that were previously owned and played by Hanneman himself.

“I feel a real responsibility to Jeff and to Kathryn to use these guitars in a way that honors him. As long as I own these guitars, I will use them and carry on Jeff Hanneman’s legacy. He remains a huge influence to me, and I probably wouldn’t be here as an extreme metal guitarist/lyricist without him,” states Jeremy.

Get the full story at Guitar World.

Broken Hope is currently in Wagner’s home studio doing pre-production for their 7th, as-yet-unnamed studio album, due out for release in 2016.