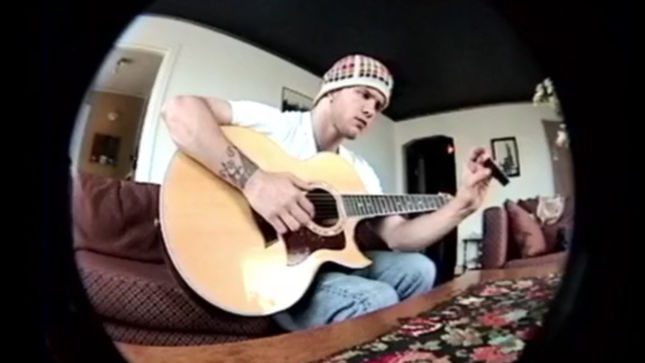 Grammy award nominated filmmaker Danny Clinch released a first-look at his upcoming documentary about Shannon Hoon, the late lead singer of the band Blind Melon, Tuesday April 7th as part of a four-week Kickstarter campaign ending Tuesday, May 5th. The film is uniquely told through the eyes of Shannon Hoon, who is given a ‘co-director’ credit in the film post-mortem. Clinch, who often photographed the band best known for their 1993 hit song “No Rain” and accompanying video featuring a dancing bee girl, was given over 200 hours of personal, never before seen footage filmed from Hoon’s own camera during the band’s rise to fame in the early 90s. Hoon tragically died in 1995 from an accidental overdose.

Before Meerkat and Periscope made capturing every moment of our lives a social norm, Hoon was leading the way, taking a hand-held camcorder everywhere he went. He began filming when he moved to Los Angeles, meeting Christopher Thorn, Brad Smith, Rogers Stephens, and Glen Graham, who soon formed the band Blind Melon. Hoon captured the band’s entire journey from being anonymous L.A.transplants to 90’s rock icons, which was practically unprecedented for that period of time. In this documentary, we watch the fantasy of fame be realized through the eyes of the person it is happening to.

Hoon’s footage also captures a cultural era in which MTV and the music video ruled supreme, and record labels controlled the music industry. It shows a band actually going through the star-making machine shortly before the industry collapsed on itself. Hoon captured the moment right before the Internet, an introduction that would dramatically change the way we consume media. The now obsolete video format that Hoon used is a reminder of the impending media revolution that he would never see, and gives us perspective on how differently we experience the world in 2015.

Hoon’s commitment to documenting his life resulted in an impressive body of work that rivals his output as a musician. He wanted people to know him, hear his music, and understand the times in which it was being made. He wanted it to be made into a film when the band got famous and “all of their memories were burned out”. The film is being directed by “Ladies & Gentlemen” – a collective consisting of Danny Clinch, Colleen Hennessy, Taryn Gould, and the late Shannon Hoon. Together, the directors are working hard to maintain the integrity of Hoon’s vision and story.

Clinch has established himself as one of the premier photographers of the popular music scene, and has had work appear in various premiere publications such as Rolling Stone, Spin, Esquire, Vanity Fair, GQ , and more. Clinch’s most recent exhibit, “Walls of Sound,” showcased rare and candid photos from the music scene at MILK Gallery in New York City in association with Aether Cone.

As a director, Clinch has received three Grammy Award nominations: in 2005 for Bruce Springsteen’s Devils and Dust, in 2009 for John Mayer’s Where The Light Is, and for the short film Get Up with Ben Harper and Charlie Musselwhite.

Kickstarter – First Look At The Film: An in-depth first look at the documentary is now available on the film’s Kickstarter page. Never-before seen footage, interviews, and photos will be released throughout the duration of the campaign, which ends on Tuesday, May 5th.