German power metallers BLIND GUARDIAN will perform their 1995 album “Imaginations From The Other Side” in its entirety on their upcoming North American tour with GRAVE DIGGER.

BLIND GUARDIAN frontman Hansi Kürsch explained in a statement: “I, being asked at least a thousand times by journalists and fans if we were not in general interested in a conceptual album performance, have been surprised by my bandmates, who came up with the exact same idea during last week’s journey to Denmark and Poland. I cannot exactly remember where or when. Needless to say, the idea appeared mind-blowing and completely new to them… Guess what? André [Olbrich, guitar] and Marcus [Siepen, guitar] suggested to make this September‘s Northern American tour an ‘Imaginations From the Other Side’ conceptual tour!!! No surprise, Frederik [Ehmke, drums] was immediately up for that!

“Guess what (II), this idea, coming out of the mouths of my long-term companions somehow started to sound appealing to me as well. It might be the two beers I drank that evening, but I, for whatever reason, spontaneously agreed on doing so, and now they are bound and determined to hold me to my word.

“Instead of revealing more secrets, I better go back to my rehearsal room and practice these songs. This will be a busy summer for us and certainly an enjoyable upcoming experience for our North American friends.”

After making a stop at the ProgPower USA festival on Thursday, September 9, BLIND GUARDIAN will kick off the second leg of its “Beyond The Red Mirror” tour at The Orpheum in Tampa, Florida. The trek will include one Canadian date as well as stops in Worcester, Milwaukee, and conclude on October 5 at The Fillmore in San Francisco, California.

BLIND GUARDIAN‘s tenth studio album, “Beyond The Red Mirror”, was released in North America in February 2015 via Nuclear Blast. 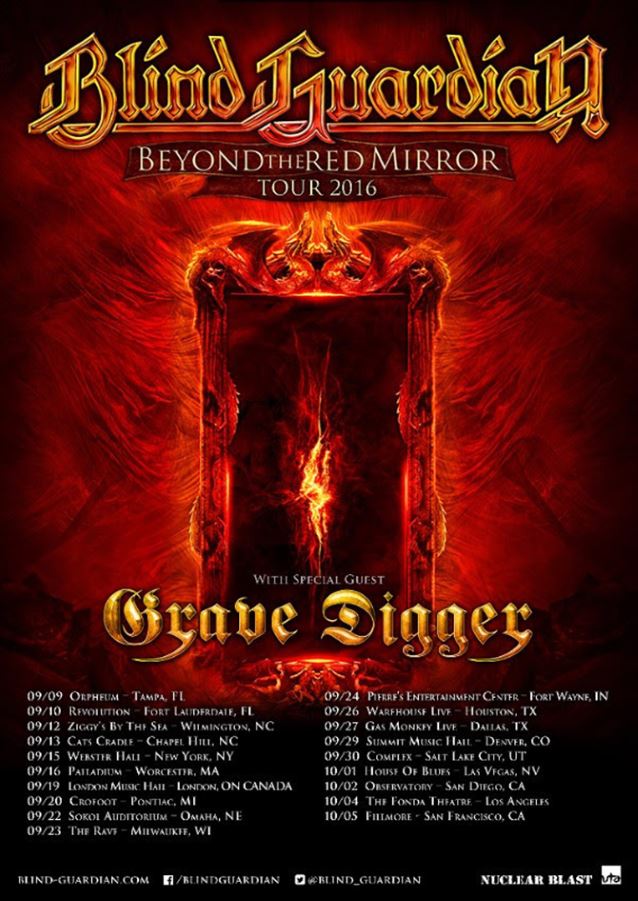