Fan-filmed video footage of BLACK SABBATH‘s November 30 performance at Pedreira Paulo Leminski in Curitiba, Brazil can be seen below.

BLACK SABBATH guitarist Tony Iommi revealed in a recent interview with Ultimate Classic Rock that he plans to stay busy with music even after the band plays its final shows in February. Iommi said: “I’m not going to leave the music business. I still want to write and play and I’ll be doing some TV for something over here in England called ‘Guitar Star’. But I love the playing, I love gigs, I just can’t travel anymore.”

Iommi also indicated that SABBATH itself may still have a future, just not as a live act. He explained: “As I said, I’ll be doing some writing. Maybe I’ll be doing something with the guys, maybe in the studio, but no touring.”

Iommi told The Pulse Of Radio a while back that he intends to keep playing music as long as he can. “I’ve always believed in what I do and I always… The music, for me, has been a major part of my life. It’s lovely just to be able to keep on doing it just to upset people. As long as I can do it, I’ll do it — and as long as I enjoy it. You’ve got to keep fit to do it at my age, so I’ll have a go [at it].”

The legendary guitarist was diagnosed with lymphoma in early 2012, shortly after SABBATH revealed plans to reunite for a new album and tour.

He soldiered on, undergoing treatment even as the band recorded its 2013 album “13” and toured extensively to promote it. His cancer is now officially in remission.

SABBATH played the last U.S. shows of its career on November 8 in Tulsa, Oklahoma, November 10 in Houston, Texas and November 12 in San Antonio.

The band will close out its live career for good in early February with two shows in its hometown of Birmingham, England, where SABBATH first came together in 1968. 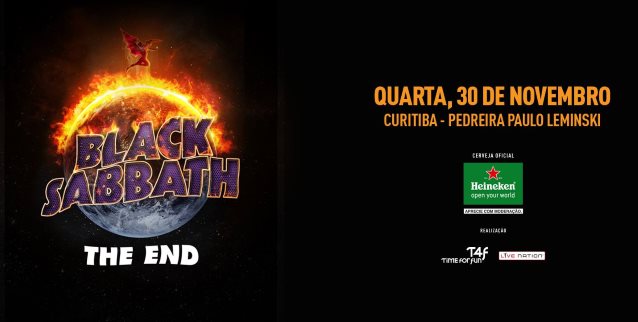