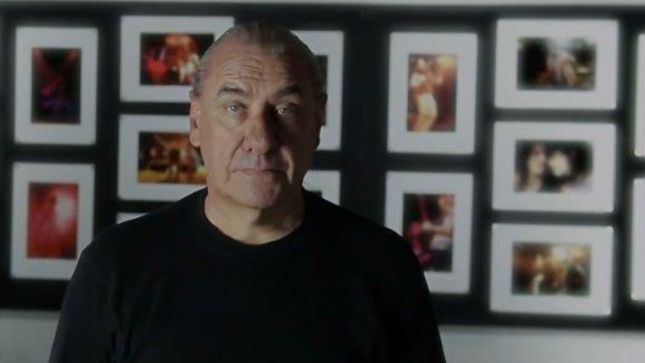 In his latest Rock 50 podcast, original Black Sabbath drummer Bill Ward salutes Rush drummer Neil Peart and lectures some of the rock press on their reporting on a recent interview he did with Eddie Trunk.

Ward was recently interviewed on The Eddie Trunk podcast (the complete audio can be heard at this location). Ward was asked if the success of Black Sabbath’s 13 album – which was released in 2013 and featured Brad Wilk of Rage Against The Machine on drums – and the tour behind it took him by surprise. He replied, “I didn’t think it was successful at all. Well, in terms of live attendance, I think it’s gonna go, ’cause the band’s really well known. But I really didn’t… I was working on detachment – serious detachment – and I wanted to make sure that I went down the line and detached myself as much as possible. I had to stop loving them, because if you’re loving a dog as it’s biting you and ripping your insides out, it’s hard to love a dog that’s doing that. So I actually stopped loving them, and I had to learn what we call detachment. So whatever they were doing, I could care less. I wasn’t interested in the fucking album 13. I’ve heard twenty bars of it – that’s all I’ve heard – and then I turned it off and said, ‘That’s a pile of shit,’ and that’s the truth. And I couldn’t care less what they were doing on tour.”

Speaking on his Rock 50 podcast, Bill states: “Let’s go back to 13 for a second, so I can make it clear for the record. I heard about twenty, twenty-four bars of one track… one track on 13, and I listened to it, and I just didn’t like it at all; I just didn’t like it. And I have that right not to like it. Recently, at the Ivor Novello Awards, where I was with Tony and Geezer, Geezer mentioned to me that he bought, or he downloaded, my new CD, which was Accountable Beasts. I said, ‘What did you think of the album?’ He said, ‘I love it musically, but I can’t stand it vocally.’ It just so happens that Geez doesn’t like my singing. He has that right. He has that right not to like it. But I’m fucked if the press is gonna slam me up the wall or come out with some pretentious bullshit about using headlines that are completely, you know, it’s just, like, what the fuck is all that about? I’m just saying it from my heart, if you’re listening out there: Hey, get a clue! I really dig these people that I’m talking about, and I listened to 24 bars. I haven’t heard the rest of the album 13. I haven’t heard it. And I never listened to it. One of the reasons I didn’t wanna listen to it was because I felt it would be quite painful to listen to. Not musically, but emotionally, it’s quite painful to listen to something that you wanted to be part of, but were unable to be part of, because I’m fighting for some principles in my life, and that includes the way that I interact with those three guys… Black Sabbath. It’s about principles, folks. That’s all it is, okay? So when these big headlines come out like that, then… ooooooh, man! Talk about fanning the flames… Anyway, just for the record, I love Tony, I love Geezer, and I love Ozzy Osbourne, and they are great musicians, so I’m letting all the Ozzy fans know that as well.”